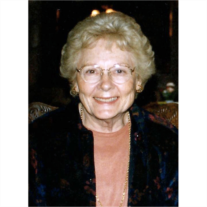 Eva Louise Mehner died peacefully on May 18, 2017 at home in Lake Forest, California. She was born December 18, 1923 in Roosevelt, Utah, the daughter of Eva May Wimmer and Francis Xavier Bellon. After 23 years in Roosevelt she moved to Salt Lake City for a year, and then on to San Francisco, California where she was a dental hygienist. It was there she met her husband and soul mate Frank. She spent 20 years as a military wife living all over the world and loved all of the adventures and new cultures she encountered. She and Frank eventually settled in Southern California, where they raised their three children.

She was a loving and dedicated mother, wife and friend to all, known affectionately as “Grammy” to her grandchildren and great-grandchildren. No one ever left her home without feeling loved or without a handful of Werther’s caramels or gummi bears. Her husband always said she was one of the only people he knew that was beloved by men and women of all types and all ages.
She was a constant example of pure goodness to those fortunate enough to know her. Her church service included many years serving the children in the Primary organization and in the Lamanite program where she helped placed American Indian children with families. She also ministered to the sick and needy and was a friend to anyone who needed a listening ear.

She is survived by her daughter Linda, sons Drew (Kathy) and Glenn (Tiffany), stepdaughter Dolly (Dexter) and numerous grandchildren and great grandchildren. She is preceded in death by her parents, her husband Frank, two sisters and her daughter- in-law Barbie. She was fascinated by the concept of life after death and read lots of LDS literature on the spirit world. We are confident she is holding hands with her beloved Frank once again, no longer weighed down by the suffering of mortality.

The funeral will be held on Saturday May 27, 2017 at the Church of Jesus Christ of Latter Day Saints located at 23850 Los Alisos Blvd, Mission Viejo, CA 92691. Services will be at 11:30am with viewing at 11am. Interment will follow the funeral at El Toro Memorial Park, 25751 Trabuco Road in Lake Forest.