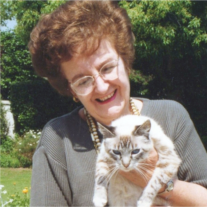 Euphemia “Fame” Rybicki, age 94, passed away on April 25, 2016. She was born in Chicago; came to Alhambra with her sisters and parents, Giles Edward and Eva Ratkowski; attended All Souls School, Ramona Convent and graduated from Alhambra High School in 1938. Married to Anton “Tony” Rybicki on May 2, 1942. She attended Woodbury College, East Los Angeles College and California State University, Los Angeles.

Fame was employed by the Alhambra School District for 15 years as the superintendent’s secretary and public information assistant. In 1972, she became a Progressive Savings branch manager and later, their vice-president of marketing, retiring in 1981 after serving as treasurer of the National School Public Relations Association, Southern California Chapter. She served as president of the Ramona Convent Alumnae Association, and was a member and director of many Alhambra community organizations: City Board of Appeals, Library Board, PTA, Planning Commission, Hospital Board, Hospital Auxiliary, Police Facility Advisory Committee, Citizens Against Crime Committee, Citizens Committee for Library Construction and the Day Nursery since 1965. After heading the Alhambra Beautiful Committee for two years, she became the first woman president of the Chamber of Commerce in 1981. She received many awards: Ramona Convent’s first honorary diploma presented to a past pupil, Civitan’s Certificate of Merit for Outstanding Citizenship, PTA Honorary Service Award, Business and Professional Women’s 1971 Woman of the Year, Ramona Convent’s Durocher Medal of Honor, Knights of Columbus Council #2431 Award and the 1980 Chamber of Commerce Past President’s Award.

The Alhambra School District commissioned her to write the elementary district’s 180-page 1986 bicentennial history and the 400-page 1998 bicentennial high school district history. She and her sisters, Jean Hussin and Modest Schwartz, followed the example of their parents to “give back to your community.” She leaves her daughter Joan Steen; grandchildren Michelle Hennis and Mandy Wellersdick; great-grandchildren, Brian, Megan, Connor, Taylor, Paige, Cole and Lauren.

The Memorial Mass: 10:30 am, Monday, May 2, at Calvary Catholic Cemetery (main mausoleum chapel), 4201 Whittier Blvd., Los Angeles 90023. Interment will follow at the Calvary mausoleum. In lieu of flowers, please send a donation to one of the following: