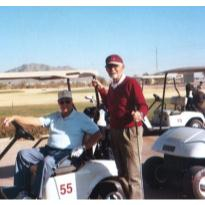 Loving Husband and Father passed away peacefully at home surrounded by his family on July 20, 2010. He was born on Feb. 3 1928 to Stanley and Rena Young on their farm in Roy, WA. The family later moved to the city where Gene graduated from Hoquiam High School in 1946.

After graduation, Gene joined the Marines and entered boot camp in San Diego, CA, transferred to El Toro Marine base where he was recruited into the Marine Air West Coast Band. He later joined the Reserves and was recalled during the Korean war at Los Alamitos Air Station. He was Honorably Discharged from the reserves in 1954.

In his off-duty time he enjoyed all types of outdoor sports such as motorcycling and participating in Biathlons.

Gene is survived by his wife Victoria Vicki; 3 daughters, Darlene DeAngelis, Debbie Hightower and Leonora Owens; 9 grandchildren and 2 great-grandchildren and one surviving sister Marguerite Williams. He is preceded in death by his parents and 3 other sisters. He will be missed by all.

In lieu of flowers, donations in Gene’s name can be made to The American Cancer Society.