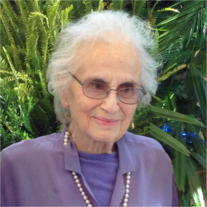 Esther Longoria Veyna, age 93, died on Saturday, July 29, 2017 in her home following a massive stroke. She was born on August 4, 1923 in East Los Angeles to Angel and Maria Longoria, immigrants from Zacatecas, Mexico. She graduated from Roosevelt High School and attended Los Angeles Trade Tech to study fashion design. She married Gonzalo Veyna on June 7, 1947. Gonzalo worked for his family business, Orange County Nursery. Esther remained by her husband’s side as the company grew in the postwar years. They raised their three children in the Norwalk/La Mirada/Whittier area.

Esther was a member of the Women’s Clubs of La Mirada and Whittier. She volunteered at the Fred C. Nelles Correctional Facility for Boys. She competed in sewing contests and won several times at the County level. She was a charter member of the La Mirada Artists Association and helped start the La Mirada Art Festival. She and Gonzalo traveled to Europe, Asia, Africa, South America and Australia with the California Association of Nurserymen. She traveled to Mexico and Europe several times with family and friends. In 1982, Esther and Gonzalo moved to Dana Point, California. There she helped design and remodel the home she would always love the most. Esther continued sewing, painting and crafts at her new residence. She volunteered at the nearby Mission Capistrano and was among the first parishioners of St. Edward’s Catholic Church of Dana Point. She helped care for her grandsons who would eventually attend the Parish school. Following the death of her husband, Esther relocated to Moorpark so she could be closer to her children and the family business. She continued to enjoy hosting family events, sewing, and travel. She also spent much time recuperating from multiple hip injuries.

Esther Veyna was a woman of style and substance. She had a great pride and love for her family. She had a strong will and a strong sense of faith. Her beauty was matched by her wisdom. She was somewhat shy. But, she was a fierce debater of politics and religion in her day. She touched many lives. She will be greatly missed.

Rosary and Vigil will be held from 4:00 pm to 10:00 pm on Friday, August 11 at O’Connor Mortuary in Laguna Hills. The funeral mass will take place at St. Edward the Confessor Catholic Church on Saturday, August 12 at 11:00 am. Interment will follow the mass at Cemetery of the Holy Sepulcher in Orange, California.