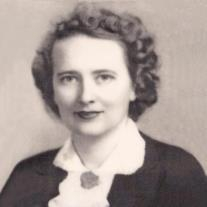 Esther Marie Gaffney passed away peacefully on Friday, February 6 at the age of 101. She was born in Philadelphia, PA, the oldest daughter of John and Sophie Gaffney. She was preceded in death by her parents and sister, Regina C. McEvoy. Esther is survived by her niece, Pat (Dick) Kabler, and three nephews, Larry (Michele) McEvoy, Michael (Jan) McEvoy, and Peter (RoLayne) McEvoy; a grandniece Andrea (Jason) Spero, three grandnephews, Darren, Morgan, and Ryan McEvoy; and great-grandnieces, Ella and Maya McEvoy Spero.

Esther graduated from Overbrook High School (1931) and received a diploma at Drexel Institute where she attended a two-year secretarial program (1933) in Philadelphia, PA. She spent several years working for an advertising firm before joining the military to serve in the war (WWII). Esther received an honorable discharge from The United State Marine Corps (1945), attaining the rank of Captain. She took up residence in Whittier, CA and at age 46 entered Immaculate Heart College in Los Angeles receiving a BA Degree (1963). At that time Esther was the oldest graduate of Immaculate Heart College. She taught in Los Angeles prior to moving to Laguna Beach, CA in 1967, where she taught at St. Catherine’s Catholic Elementary School for several years; later she became the school secretary.

Esther enjoyed many activities including walking on the beach several miles every day up until the age of 94. She was a fixture at daily Mass at St. Catherine’s until confined to her home at age 98 whereupon Holy Communion was administered to her daily by loving parishioners. She was the Grand Marshall of the Laguna Beach Veterans Day Parade in 1997 at the age of 83. Her obsession with crossword puzzles and bridge kept her mind sharp until her dying day. She was loved by her family, friends and acquaintances. Her life was full and she longed for the day she would meet her Creator.

Services to celebrate Esther’s life will be held on February 13 at St. Catherine’s Catholic of Siena Catholic Church at 10:30am. The family asks that in lieu of flowers, donations be sent to St. Catherine of Siena School located at 30516 South Coast Highway, Laguna Beach, CA 92651 or Maryknoll Fathers & Brothers, PO Box 302, Maryknoll, NY 10545-0302.