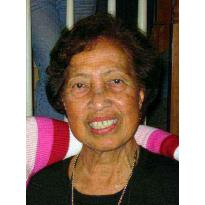 Espy a.k.a. Pacing Moylan was a much beloved mother, grandmother, wife, sister, aunt, and friend during her 80 years.
She was born in Manila, Philippines on Jan. 24, 1927 and named Esperanza Ravadilla Jayme.  Her nickname was Pacing and she was the seventh of eight children born to Fortunato and Rosario Jayme.  Pacing’s siblings are Fortunato Jr., Cesar d, Melchor, Jesus d, Fe, Caridad, and Vicente.  The close-knit family lived very happily and she was spoiled by her doting parents who raised her to be a devout Catholic.  Pacing, like her two sisters and five brothers, graduated college, before marriage.  On Nov. 30, 1956, Pacing married an Irish American, U.S. Marine Gerald ‘Jerry’ Moylan.  He preceded her in death on Dec. 31, 1999.  Although they came from different worlds, both of them were commited to loving each other and their three children.  They practiced their Catholic faith, and they communicated using their gift of humor.  She called Jerry ‘Sunshine’ and he called her ‘the Boss’ or  even ‘Mouth’ which always got her to laugh!
Pacing continued to be called that by her Jayme family but she was known more as Espy by her Moylan family and stateside friends.  Espy and Jerry had four children: Valerie 1957 -, Martin 1958 -, Hope 1959 – and Mary Elizabeth who died shortly after her premature birth in 1960.  As a career Marine, Jerry moved his family every 1-3 years before retiring in 1972.  Espy and Jerry decided to make El Toro their final home.  Espy was proud when Jerry and the three Moylan children all graduated from local colleges.  Espy was a traditional housewife and homemaker like most mothers of her day.  Although she was raised with maids during her own childhood, Espy learned to clean and cook in adulthood which kept her loving home running!  Her children were everything to her and she spoiled them!  In repayment, they honored her by growing up to be loving and Catholic-commited parents themselves.  Valerie is married to Donnie Dawson and has three children: Kimberly 21, Kelly 19, and Kevin 16.  Martin has three children named Jeremiah 21, Natalie 19, and Trevor 17.  Hope is married to Phil Petrozzi and their three children are Anthony 23, Jonathan 20, and Angela 17.
Espy had a happy and full life although she also struggled with hereditary heart disease especially at the end.  Through it all, she always was a positive and humorous person.  She  got along with everyone!  She loved to dance and eat!  She always had a smile and never complained!  Everyone loved being around her and she was happiest being with her children, nine grandchildren, and her siblings!   What a gift her life was to all of us!   What fun!
We will miss her so much!  God Bless our Esperanza.  May you enjoy the eternal company of your Jerry, your parents, and other relatives and friends who passed before you.  Now you can eat, laugh, and dance the heavenly nights away!
On Monday, April 2, 2007, a 7:30 p.m. Rosary and Visitation from 7 – 9 p.m. will take place at O’Connor Mortuary, 25301 Alicia Parkway, Laguna Hills,, CA  92653.