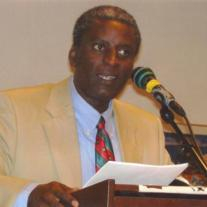 Eshetu Abate, 56, was called to be with his LORD and savior Jesus Christ on December 28, 2011 in Fountain Valley, CA while his family was at his side.

A visitation service is being held on Friday January 6 at O’Connor Mortuary in Laguna Hills, CA from 7 to 9 P.M. In addition, there will be a farewell service conducted at First Lutheran Church, in Long Beach, CA at 1 PM on Saturday January 7 as Dr. Eshetu will be interred in his birthplace of Ethiopia.

Eshetu Abate was born in Arbegona, Ethiopia to Mr. Abate Koyra and Egigayehu Kassaye. From his early years, the good news of Jesus Christ reverberated in the Abate household. Nevertheless it was not until he reached the age of 18 that he realized his life’s purpose: to walk with the LORD and proclaim his grace and mercy to others.

After obtaining his doctorate in theology, 1988, from Concordia Seminary, St. Louis, Dr. Abate returned to Ethiopia to work at the Mekane Yesus Thelogical Seminary from 1988-2000. Afterwards he worked at the Bible Society of Ethiopia as a translation consultant from 2000-2002. His final professional spell was at Concordia University, Irvine where he worked as professor of Theology from 2002 until 2 weeks before his passing.

Above all, though, he esteemed working as a servant of the LORD; first as a Reverend at Addis Ababa Mekanye Yesus in Ethiopia and later in the United States’leading Ethiopian congregations in Long Beach and Los Angeles.

He will be remembered for his deep love and commitment to Jesus Christ.

He is survived by his wife of 21 years, Amarech and his three children: Miseker, Eliezer and Benjamin.

Condolences and Donations may be sent to the family through:

OR
You can send a check to the following address:
Francis Stephanos
4537 Cinnamon Ridge Trail
Eagan, MN 55122