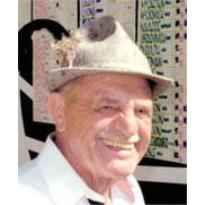 ?Pop? passed from this life into the awaiting arms of his Lord Jesus Christ on Monday, June 26th. Erv transitioned from this world to his eternal home in Heaven on his own terms, peacefully, surrounded by loved ones and family.

He was best known for his friendly smile, warm handshake, trusting soul and his witty sense of humor. Erv was foremost a loving husband, father, grandfather and a lifelong devoted Catholic, with an unwavering faith in the Holy Catholic Church. Born in Milwaukee, Wisconsin, he was the youngest of 11 children. His father passed away when he was an infant and Erv was lovingly raised by his widowed Polish immigrant mother and his many siblings. He was a hardworking self-starter, who migrated to Southern California with Mom after the end of World War II. He proudly served his country during the war and it was while stationed in London that he met and married his beautiful, loving wife Lily Lee.

Armed with only a high school education, a staunch work ethic, a yearning for the ?American Dream? and a better life for his family, Erv’s accomplishments were many. Pop’s natural ability to open doors with his smile, firm handshake, pioneering spirit and business acumen lead him down a long road to the accomplishment of a lifetime. In the 1960’s he planted the seeds of a company, which grew from humble beginnings into the largest service, oriented retailer to the professional contractor in the world. The company, which he founded, White Cap Industries, is now a wholly owned subsidiary of the Home Depot with sales branches from coast to coast and estimated 2006 revenues in excess of $1.5 billion. Additionally, Erv was a Disabled Veteran; Member of the Pacific Telephone and Telegraph Pioneers; an Exchange and Kiwanis club member; Member of the Knights of Columbus; Founding member of Marbella Country Club.

?Pop? was dearly loved by many and will be deeply missed by all who he has touched with his kindness and warm smile. However, he will always be best remembered as a loving husband, father, grandfather, and sibling. He is survived by this beloved son, Greg and his grandchildren, Melissa, Justin and Ryan. A traditional Roman Catholic Vigil Service will be held on Friday, June 30th ~ 7:30 P.M. A Funeral Mass is to be held on Saturday, July 1st ~ 10:30 A.M. followed a short Reception in the Parish Hall. Both the Vigil and the Funeral Mass will be held at:

In lieu of flowers, the family requests donations to be made to a Catholic Charity of your choice in Erving’s Memory.