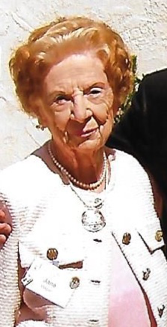 She was the eldest of three children and is preceded in death by her siblings John M. Hagan Jr. and Alice Hagan Eley. She is survived by niece Dawn Hagan and nephews John Hagan III, Dave Hagan Eley, and Ralph Eley III.

She attended Mary Baldwin College, and worked at Princeton University and Duke University.

Jane was the Art Research Librarian at Brand Library & Art Center in Glendale, California for 16 years before her retirement.

She was smart, sharp and had a sense of humor only witnessed by a very few being extremely private. She was always up for an adventure travelling to many countries in the world. Paris was her favorite place.

Jane was an avid fan of the Lakers, the Kentucky Derby, the game shows Jeopardy and the Wheel of Fortune.

She enjoyed and took advantage of the myriad of shows at the theatre in Laguna Woods Village where she resided since 1997 until her move to Olivera Homecare in Mission Viejo in 2019.

St. George’s Episcopal Church in Laguna Hills, CA became her spiritual haven and attended not only the Sunday service but also the Wednesday healing service.

Donations can be made to Salvation Army in lieu of flowers: https://www.salvationarmyusa.org/usn/