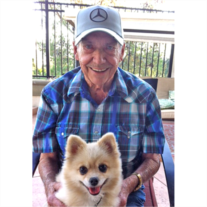 On November 22, 2017, Elmer Douglas Stice passed away peacefully at the age of 83 with his daughter holding his hand. While it is enormously sad, it is comforting to know he is no longer suffering and now reunited for eternity with his wife, Neda, who passed away in 2011. He was a beloved husband, father and grandfather who was forever devoted to his family and friends.

Elmer was born on March 8, 1934 and grew up in East Peoria, Illinois. He was the youngest of three children and earned the nickname “Sunny” for his huge smile. After high school, he became a truck driver and was very proud of being a Teamster but even more proud of the fact that he held a perfect driving record with no accidents. He loved to be behind the wheel, whether it was a semi, a motorcycle or an RV. He met his wife, Neda, when he stopped by her house to pick up his friend who happened to be her brother, and it was love at first sight. He knew at that moment he wanted to marry her, and she was his first and only love. Mom and Dad both worked very hard to provide a stable and loving home, and they were a true example of teamwork and partnership in a marriage. They loved to travel in their motor home to see all the beautiful sights in the US and often allowed their grandson Jeffrey to choose the destinations. After a trip to Hawaii, they could proudly say they had visited all 50 states.

Elmer took the time to befriend anybody who happened to cross his path, and he never met a stranger. He loved to share a cup of coffee with anyone who had the time. The last seven years of his life he resided in California with his only daughter Dianne but still considered East Peoria his home. He is survived by his daughter, Dianne Miller of Mission Viejo, California; two grandsons, Jeffrey Smith, Jr., of Mission Viejo, California, and Nathan Stice (Elizabeth) of Morton, Illinois; two sisters; and his best friends, Rick and Sharon Crawford of East Peoria, Illinois. He was preceded in death by his wife, Neda June Stice; his parents, Henry Douglas Stice and Katherine Melvina Stice; and his only son, Larry Douglas Stice. His final resting place will be at Neda’s side.

I was blessed to have had such a kind and loving father and honored that I was able to hold his hand during his last breath. I will carry his memory and the lessons I learned from him in my heart forever. Thanks for everything, Pops. I’m sure I’ll see you, Mom and Larry again someday. Until then, you will always be my Forever Father.