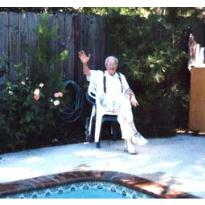 His parents moved west in 1916, first to San Diego, then Los Angeles before settling in Long Beach in 1922. Ben’s first ten years in Long Beach were spent at the renowned Hotel Virginia where his father owned and operated the tailor shop. He became acquainted and recreated with many national leaders and celebrities who summered in Long Beach during this era and spoke of these years and individuals his entire life.

He graduated from Wilson High School in 1928, Long Beach City College in 1930 and received his law degree from Southwestern University School of Law in Los Angeles in 1939. He taught at Southwestern during his final year there. He was a member of the North Dakota State Bar and was sworn in to practice before the United States Supreme Court.

Drafted into the Army in 1941 he served in the Quartermaster Corp. before being medically discharged after complications following an emergency appendectomy. In spite of his short stint in the service, he became a champion for veterans causes after the War, both locally building of the Navy Landing, Veterans Administration and Naval Hospitals and nationally. He served multiple terms as Commander of the United Veterans Council and represented the five western states in the national veteran’s organization.

Among his many positions, Ben taught history and government at the Southern California Military Academy in Signal Hill, was employed in contract administration at North American Aviation during the height of the space race, performed legal work for Douglas Aircraft and other aircraft companies. One exciting diversion from this path involved unsuccessfully drilling for oil in New Mexico in partnership with close friends. After retirement, he enjoyed teaching law at Long Beach City College for many years.

Ben was very active civically in Long Beach for most of his life. He made a close but unsuccessful run for City Council in the 8th District in 1958. He served on the Cultural Heritage Commission, the South East Environmental Recovery Foundation, SCAN’s advisory board, the White House Conference on Aging appointed by Congress member Steven Horn. He gave over 200 Bill of Rights speeches at service organizations across Southern California for the Bill of Rights Foundation. He was awarded the Key to the City of Long Beach by the Mayor and City Council for his years of service.

Ben loved Long Beach and seemed to know thousands of its residents. For him it was the center of the universe-an unparalleled place to live. He was happy about his life, his wife and family, his quarter acre back yard with over 20 fruit trees and his many rich life experiences. He and Audrey made excursions to Europe exploring their family heritage in their later years which brought them much joy. He had a humorous outlook on life that endeared him to his friends. A lifelong student of history, Ben was an avid Lincoln and Civil War buff. His admiration of Abraham Lincoln helped to shape his humor, view of government and philosophy of life-all of which are part of his legacy to his three children.