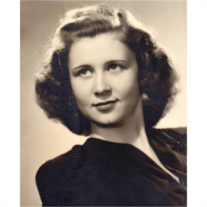 Betty Ann Malone was born at 36 North Olive in Alhambra, California. She was the oldest sister of Beverly and Esther in the Malone Family. Betty, along with her brothers Pat, Jim, Stan and Everett attended Alhambra High School. Upon graduation she enrolled at the Sawyer School of Business in Pasadena. She became a Stenotype operator and bookkeeper. Her first job was as a secretary book keeper for Golden State Machinery Company in Los Angeles. It was there Betty met her husband Robert (Bob) Gantz. They were married at St. Steven’s Church on Main St. in Alhambra. After their marriage, they purchased a plot of land in Monterey Park and together built their beautiful custom adobe home; first the small house, which became the garage and then their real home. They raised 3 children: Craig, Coleen and Scott. The Gantz family attended Miraculous Medal Church in Montebello where their children attended Marian Catholic School.

Betty found a new job closer to home in East Los Angeles as the book keeper secretary for Elite Lamp Shade Company. She worked there until it closed in 1982. She took some time off to help raise her granddaughter, Lisa, and a couple years later her grandson, Ryan. In 1988 she took a job at Siapin Horticulture in Pico Rivera as their bookkeeper. Betty retired from 50 years as a secretary on July 5th 1997.

Betty loved crafts, family gatherings, collecting things and family genealogy. When her sister Esther passed away at an early age, Betty helped organize ‘THE MALONE FAMILY CAMP’; a gathering of Malone family members young and old at Camp Timberwolf in Bucks Lake, California. She enjoyed every minute of that wonderful time together with her family. When her husband died in 1996, she gathered her family together and spoke about the good times they all shared together, the traveling they did and how she loved the house they built. Betty started traveling with her new senior friends to local and distant places; always sharing the highlights of her trips.

As time passed Betty became physically unable to take care of herself and her home. She moved to an assisted living facility in San Juan Capistrano. She lived there for 3 years with the care she needed, activities to keep her busy, weekly rosary, mass celebration and food she enjoyed. She became a legend at Bingo, played cards in the evenings and of course, participated in crafts.