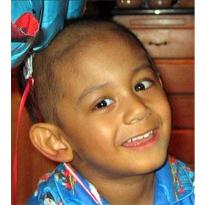 Elijah ?E? Michael Shihad took his first breath in Heaven on Monday, February 27, 2006 at 3:17 in the morning at the tender age of 3. Born on December 17, 2002 in Anaheim, CA to Mike and Connie Shihad of Rancho Santa Margarita, California, this little angel began his earthly mission.

Big ?E? was diagnosed with AML Leukemia at ten months old and began aggressive chemotherapy treatments, which lasted until July 2004. He entered remission soon after induction in December 2003. Living life as he should, building his train collection, indulging in his Thomas movies, taking train rides as far as Hawaii, Elijah relapsed in April 2005. He underwent a stem cell transplant soon after and was able to come home in August. During recovery, our angel baby relapsed once again in November. In an attempt to prepare him for another transplant, he endured 3 more cycles of treatments until January 2006.

As we took on this journey, big ‘E’ took a journey of his own. He managed to bring together people from all over the world through his strength and courage. He touched lives by sharing with them his lively smiles and bright spirit. He taught lessons of life by loving his Mom and Dad as though they were perfect. He also leaves behind his Grandparents Romy Mila, Milad, Isis; Godparents Matt, Joy, Ken, Bridget; Uncles and Aunts Ramon, Lori, Rin, Darwin, Daniel; Cousins Vincent, Nathan, Nikki, Kirstin, Bryan and his best buddy Trent. Once he fulfilled his mission, he reached out and took his Creator’s hand to return to His Heavenly Kingdom where we will once again be reunited with him. For now, we will work towards fulfilling our own mission that God has given us through our sweetest angel baby. May he rest in peace!