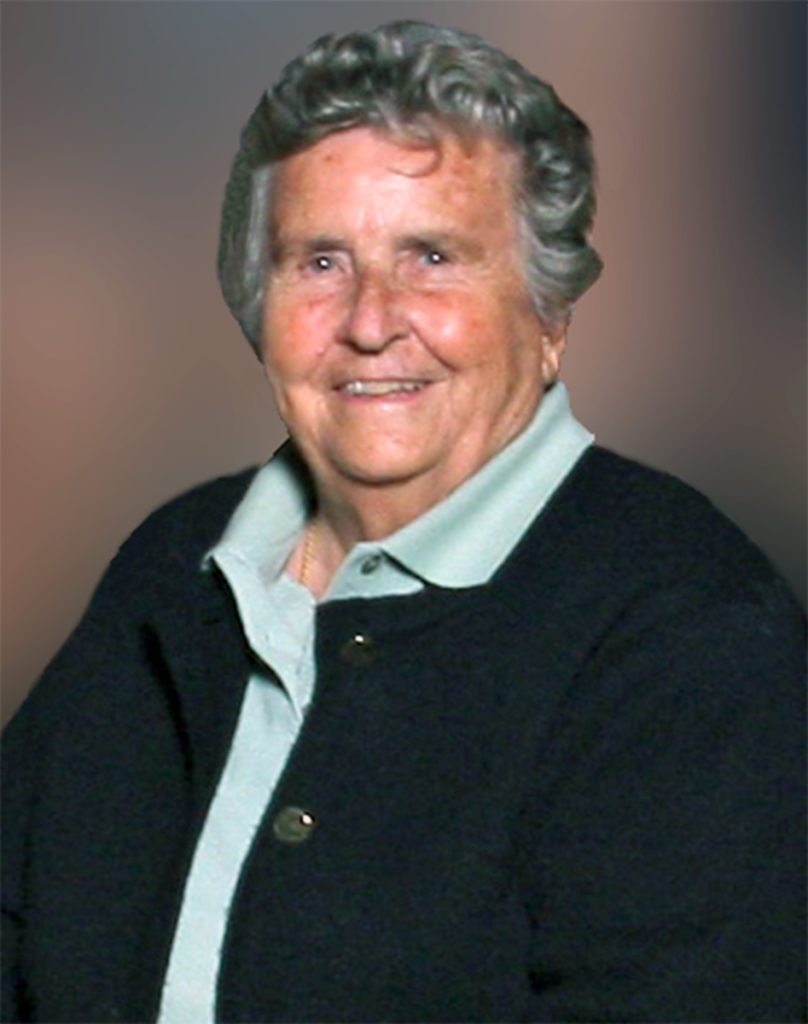 Elia Bonino passed away in Dana Point , California, on September 2, 2019. Elia was born to Giuseppe and Ida Bonino on February 14, 1927 in Los Angeles.

After graduating from Marshall High she attended LA City College and graduated from UCLA. Elia began her teaching career in the town of Avenal, California and went on to Bellingham, Washington to earn her Master’s Degree in Kinesiology from Western Washington University. She returned to Los Angeles to become a tenured professor at LA City College until her retirement in 1980.

An excellent athlete Elia enjoyed teaching a wide  variety of sports and health classes.  But,  personally her favorite sports were skiing, golf, and hiking in Yosemite National Park and near her mountain cabin in Wrightwood, California.

Music came naturally to her. She played the piano by ear and loved Broadway shows and opera and was a founding donor to the South Coast Opera Company.

Elia loved sports, of course, and was one of the few remaining Angelenos who attended both the 1932 and 1984 Olympic games.  (She also attended the 1960 Olympics in Rome.)  She enjoyed rooting for her LA/Anaheim/St. Louis/LA Rams on television.

Although never married Elia was a most attentive and devoted Aunt to her nieces and nephews Mark, Gina, Joey and Maria and to her grandnieces and nephews, Christopher, Sarah, David, Lisa, Julie, Michael, Claire and Anne Marie. She was recently enthralled with the birth of her two great-grand nephews Joshua and Luca Repetto.

Besides her family and friends her ultimate joy was her retirement home in Dana Point just one half block from the park overlooking “…the most romantic place in California”: Dana Point Harbor.

Elia was preceded in death by her only sibling, Floyd Bonino, and her friends Joan and Nunzio Crisci of South Laguna and is survived by the aforementioned nieces and nephews and her sister-in-law Alma Bonino, numerous cousins and friends both in California and Chiavari, Italy, her ancestral home.

A memorial mass was celebrated at Our Mother of Good Counsel Church in Los Angeles on Saturday September 7, 2019.

In lieu of flowers, please donate to a scholarship fund that has been established in her name:

A Life Filled with Adventure

I am the oldest of Elia’s nephews. The good thing about being the oldest is that you get to know your parents, grandparents, aunts and uncles when, relatively speaking, they are still younger and it is one of the rules of life that younger people are more fun.

And the Auntie Elia I am talking about is the young Auntie Elia who had the spirit of youth all her life and who could generate more fun than any niece or nephew could hope for.

When Elia was born on Valentine’s Day in 1927, the Boninos lived on Concord Street in Boyle Heights. I’m told this area is undergoing a renaissance, but then it was an ethnic mix of Italian, Jewish, Japanese and Croatian immigrants.

Elia was always a “tom boy” and enjoyed playing sports more than playing with dolls. A story she told repeatedly was the Christmas when Floyd got a mitt, ball and wagon and Elia got a doll and baby carriage. There is actually a picture of the occasion and the look on Elia’s face proves the truth of the story.

In 1939 as Elia was finishing junior high, Nonno Joe moved the family across the LA River and built the house on Holly Knoll with its 42 steps from the street to the front door. I know exactly how many steps there were because in later years it somehow became my job to carry whatever heavy items they needed up those steps.

Elia attended Marshall High and went on to UCLA and made her way to LACC as a teacher in the PE department.

At five feet in height she was short of stature (actually she was tall for a Peirano” her mother’s family) but she was a ball of fire. She had lots of energy and did everything with pep, vim and vigor. There was not a sport, save basketball, that she did not play and only a few that she did not teach.

If Title IX had existed at that time she would have gone through college on a full ride” and it probably would have been in field hockey.

She played tennis, baseball, badminton. Later she added skiing and golf to the top of the favorite pastime list. She loved hiking, camping, skiing, swimming and fishing. She hiked to the top of Mt Whitney at least twice and skied regularly at Mammoth Mountain and Aspen.

She did not just play at these pastimes, she studied the mechanics of the swing and stance.

She loved attempting to teach her nieces and nephews those sports and skills. Unfortunately, while Joey and I got a super abundance the height genes Elia lacked, she got most of the coordination genes.

She didn’t like sitting around. Up at the cabin during the day we played horseshoes or bocce in the court she built in the yard or fwent on walks or hikes and at night played board games” like monopoly” and card games like Canasta. In those days we were on the “wrong side of the San Gabriel mountains” and could not get a radio or television signal.

Elis loved all types of music from campfire songs to Broadway musical tunes to opera and loved generally having fun.

Whether it was a trip to Disneyland, to one of the local theatres to watch the latest double feature, to Chavez Ravine to watch Dodgers or to Rome to watch Wilma Rudolph win the 100 yard dash in the 1960 Olympics” she was always ready to go… and went.

She bought a cabin in Wrightwood because she liked skiing, she took a six month sabbatical from her teaching to rent a trailer at the Treasure Island Trailer Park in Laguna (where the upscale Montage Hotel now stands).

When she was in Italy in 1960 she fell in love with a new sports car (a red Alfa Romeo) so she bought one, drove it around Italy for the summer and then shipped it home. It looked great and probably drove like a dream, but it was susceptible to breakdowns, lots of breakdowns” for example all of the rubber hoses in the engine began to deteriorate all at the same time, as soon as the car landed on US soil.

No one had the necessary parts and even if they could get them the car could not be repaired without the metric tools that in the early 60’s no self-respecting California mechanic had.

Once the Alfa Romeo U.S. dealer was trying to explain this to her in the presence of one of his mechanics, when the mechanic made the fatal mistake of telling the dealer in Italian that, in effect, “This woman is crazy and doesn’t know what she’s talking about”. She rounded on him and immediately ripped him a new one explaining in her best Zinese that she knew exactly what she was talking about.

She would drive to Laguna and pay a dollar or two to some guy who lived in a shack on a dirt road leading to a deserted beach in order to search for cowrie shells. (This is the same deserted beach where the

Ritz now stands)” the moral of this story is that while she had an eye for fun and an ear for music and ability in sports, in terms of future property values” not so much.

She did have an Achilles’ heel” she would drive anywhere, but had a deathly fear of flying and got seasick looking at a picture of a boat” still where there was a will, she found a way. She drove a car cross-country more than once and used to take the train to go skiing at Aspen and very reluctantly took a three plane trips and three ocean trips that I know of. Apparently her motto was, one trip every thirty years or so is enough.

After 40 years on Holly Knoll she moved to the condo that she bought in Dana Point and remained there for the last forty years.

She was always happy to see the nieces, nephews and great nieces and nephews and enjoyed nothing more than going to the beach to ride the waves on boogie boards (the seashells having been picked over), organizing a water Olympics at the condo pool or going out to breakfast, lunch or dinner or buying them presents that the kids liked” but the parents not so much” like the drum set she just gave Joshua for his third birthday…

She was loyal to her family and to her friends and in the last few years despite the health issues severely hampered her mobility” she was steadfast in her love of her home and her family.

She never forgot a birthday or holiday. It is now left for us to remember her. We will miss her… 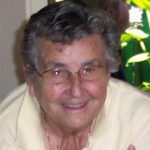