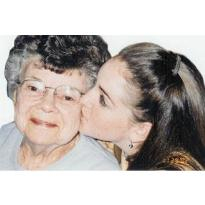 Eleanore Eggum was born Eleanore Clark on Dec 6, 1918 in Missoula, Montana. When she was eight, she and her mother and brother moved to Los Angeles where she grew to adulthood during the depression years. She graduated from Fremont High School in Los Angeles in 1938. She then became a licensed cosmetologist.

She married Harold Eggum, her high school sweetheart, at the age of 20 in 1939 and they moved to Buffalo, NY for a year before returning to Los Angeles. He worked as an aircraft draftsman and she cared for their first house in Westchester. She had just learned she was pregnant when Pearl Harbor was bombed. Her first child, Gordon, was born followed by Kathy a few years later. Harold wanted to try his hand at living in Alaska and so, in 1946, they drove there on the Alaskan highway, a very hard trip. The winter was harsh living in Anchorage in a trailer while they built a house. By spring, they were ready to head back to Los Angeles to warmth and family and settled in a new home in Hawthorne. In 1951, the family moved to Torrance and shortly after that Chris was born.

During the years that followed, Eleanore passed on to her children her love of reading, gardening, and sewing. She brought her children up in a Christian church where she was actively involved with mission’s projects. She later worked for LA County and after retiring moved to Leisure World in Orange County where she was free to enjoy her many hobbies which included oil and watercolor painting, crocheting, knitting, quilting, gardening, and reading. She made new friends and spent more time with her family. She was a wonderful grandmother and continued to teach her grandchildren her many talents.

Looking back at her life we have always been impressed with her ability to be accepting of others and how she always took the time to think things through and view them positively. It was very important to her to be a good mother who gave freely of her time and did whatever she could to improve her children’s lives. She always tried to do the right thing and was always there for all of us. She was an extraordinary woman.

For the last three years of her life she lived with Chris and died on June 3, 2005. Survivors include her son Gordon, daughters Kathy and Chris, 6 grandchildren and 1 great grandchild.