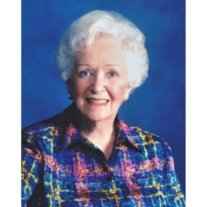 Eleanor was born in 1915 in Margate, New Jersey, and was a graduate of Atlantic City High School where she first met her future husband Jack McLaughlin. She worked for the Postmaster in Washington, D.C. prior to World War II and later married Jack at Georgetown University in 1941, following his graduation from Medical School. During World War II she was able to follow Jack to New York, Kansas and Puerto Rico before finally settling down in Philadelphia after the war. Her first four children were born in Philadelphia and the last two were born in Glendale following relocation to Southern California in 1949. From 1950 to 2000 Eleanor was very active in charitable activities at Glendale’s Incarnation Church, the Mission Doctors Association of the Archdiocese of Los Angeles, Holy Family Adoption Services, Los Angeles Social Service Auxiliary and Right to Life League. In her later years, Eleanor was a Dame of the Sovereign Order of Malta and along with Jack was very active in their yearly pilgrimages to Lourdes, France.

Eleanor is survived by sons John, Gerard, Peter and daughter Ann Gore, Mun Takeda, Chie Lee,13 grandchildren and 7great- grandchildren. She was preceded in death by her husband, Jack, and daughters Honey Jenkins and Carol McLaughlin. Eleanor’s greatest legacy was her family and her grandchildren. In 1964, Jack nicknamed her “mother bird” after Lady Bird Johnson and the name stuck forever. More recently, she was more affectionately nicknamed “Gma” by the younger, text savvy grandchildren. She loved visits from her family and could never get enough of her favorite indulgence, coffee ice cream.

Mass of Christian Burial will be Wednesday, March 27 at St. John Vianney Chapel on Balboa Island in Newport Beach with private interment at Holy Cross Cemetery.

In lieu of flowers, donations may be made in the name of Eleanor McLaughlin to Catholic Charities of Orange County, 1820 East 16th Street, Santa Ana, CA 92701 or the charity of your choice.