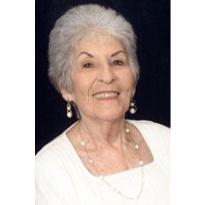 Elda June Glade was born to Arthur and Riga Glade on June 21, 1925 in Los Angeles, CA. Elda passed away peacefully, yet unexpectedly on January 22, 2007 at the age of 81. Proud of being a ?native California girl?, Elda never lived more than 50 miles from her birthplace. ?Why would I?? she always asked, ?There’s no place I’d rather live than right here.? Private services were held at Rose Hills Memorial Cemetery in Whittier where Elda was laid to rest next to her beloved son, ?Dusty.?

Elda is survived by her daughter, MaryAnn Webb of Lake Forest, CA, and her daughter-in-law, Victoria Davidson of Florida. She has 8 grandchildren ranging in age from 40 to 15! Riga Davidson-Martello Ted, Deborah Davidson, Robert Davidson Andrea, Dustin Davidson Janie, Kathryn Rodriguez Anthony, Charles Davidson Nicole, Elizabeth Aroz and Kaleigh Davidson. She also has 11 great-grandchildren, Ashley, Cassandra, Summer, Kali, Megan, Sierra, Dusty, Mary Jane, Jessie, Dylan and Sabryna. She loved God and she loved her family and she taught us the love of both. Her family was the joy of her life and she loved being our ?Nannie.? She was generous with her time; always ready to lend an ear, hold a hand and wipe a tear; she had the rare and wonderful gift of ?listening? and the most beautiful smile you’ve ever seen.

Elda married James Davidson on February 11, 1946 when he returned from the war. They were married for 37 years until Jim died in 1983. Together they traveled the United States and Mexico enjoying hunting, fishing and the great outdoors. Elda was a skilled ?fisherwoman? who could hold her own with any of the men. She was the first woman to fish the Sea of Cortez and broke her foot determined to land a 180 lb. Totuava. That was the kind of spunk she had – a ?never give up? attitude.

Elda loved being a homemaker and wherever she lived the door was always open to a steady stream of kids, friends, family and neighbors. The coffee was hot and the conversation animated. Her faith in God, her positive attitude and her tremendous sense of humor saw her through many family tragedies and serious illnesses. Her ability to share those values with others in troubled times gave them hope.

If you knew Elda you knew two things about her; she loved people and she loved the piano; the two were perfectly paired. Her brother, Dustin, taught her to play when she was just 3 years old. She was a natural, and without a lesson, she learned to play everything from jazz to rock to classical to country. She used her God-given talent to entertain and delight anyone who was fortunate enough to hear her play. During her career, she played for kings, foreign dignitaries, politicians, celebrities, the Kennedy’s, and Nobel Laureates, but nothing, nothing was sweeter to her than sitting down at that old piano and playing for her family. We will miss those times but we know she’s making beautiful music on the other side of Heaven now.

When Elda moved to Orange County in 1986 she became actively involved with the Lioness Club of San Juan Capistrano where she supported the community and many different charities. In the early 90’s she joined the Laguna Niguel Senior Center. She loved ?her ladies? and especially enjoyed the time they spent playing cards, going to the movies and, of course, enjoying a rum and coke at Patsy’s on Friday night! They were like ‘sisters? to her and her life was richer and fuller because of those precious friendships. Elda known as June-bug to her neighbors also enjoyed many activities with her friends at Whispering Fountains in Laguna Woods. As one friend put it, ?Elda never knew a stranger.?

We love her with our whole hearts?we miss her stories; her music; her laughter and her indomitable spirit – to those of us who loved her, her love will live in our hearts forever and she will always be ?Unforgettable.?