Eileen was an immigrant from Ireland and served in the ATS during WWII , a women’s auxiliary that merged with the Royal Army Corp.  She was stationed in Italy next to an American base and met her future husband, Leonard, at the Royal Palace of Caserta.   After the war, they were married in 1946, nearly 52 years until Leonard died on March 2, 1998.

She and her husband lived in Norwalk, a suburb of Los Angeles, where they raised their four children.  She was a parishioner of St. John of God Catholic Church and later St. Pius the X Catholic Church.   She worked as a data processor for a public school district until she retired.  Eileen also lived in Cameron Park, Northern California for several years, and a year in Olympia, Washington.

Eileen is survived by 3 children:  Elizabeth, John and Dympna.  Eileen was preceded in death by her eldest son, Leon, who died on April 20, 2020.

Eileen was an animated storyteller, an avid book reader and a gifted knitter. She loved singing her Irish songs, and laughed often throughout her long life.  She loved people and she loved animals, especially cats.

On March 18, 2022, her life was celebrated by a Mass and Rosary at Holy Trinity Catholic Church in El Dorado Hills, Northern California.

May she Rest in Peace. 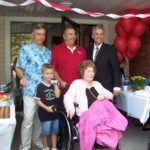