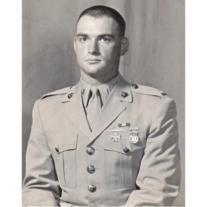 Major Edwin “Ed” R. Keyes USMC Ret. passed away peacefully June 17, 2012 surrounded by his children at his home in Laguna Hills. He was preceded in death by his loving wife of 50 years, Elizabeth R. Keyes. (2004).

As an only child, he was born on February 17, 1932 in Miami Dade Florida to T. Edwin and Violet (both deceased). Ed spent most of his childhood in Devon, Connecticut.

He graduated with a BA from Wesleyan University and belonged to the fraternity of Sigma Chi. Ed joined the Marine Corps in 1954 and proudly served for twelve years as a Fighter Jet and Helicopter Pilot for his country. After retiring and settling in Jacksonville North Carolina in 1966, he started working with John Hancock Life Insurance and became General Manager. Ed transferred to the Santa Ana, California office in 1977 with his family and continued with John Hancock till 1985.

While in the Marine Corps he earned medals as a pistol expert as well and a rifle sharpshooter and decided to share this passion and knowledge by opening Ed Sporting Goods store after retiring from John Hancock. He closed the store and officially retired in 1991.

Ed was a member of the Connecticut Freemasons Masonic Fraternity at the Ansantawae Lodge 89 for more than fifty years and a 32nd degree Scottish Rite Mason of the Santa Ana Valley of the Scottish Rite. He was also a former member of the Sudan Shriners Temple in New Bern, NC.

Ed loved his family, was a proud father, and took great pride in all he did. He had a great sense of humor which he kept till the very end. He was an avid reader which shows by the bookcases in almost every room in his house and loved to share his knowledge with all. He taught us to never stop learning. His love of all types of music which was reflected by the hours he played the organ and the house full of sheet music, records, and CDs.

His ashes will be scattered at sea to join his beloved wife.

As an expression of sympathy, memorial contributions may be sent to Saddleback Memorial Foundation, Hospice of Saddleback Valley at 24451 Health Center Drive, Laguna Hills, CA 92653 or Alzheimer Association at www.alz.org.

A celebration of his life will be held at his home following the memorial service for family and friends at 25122 Grissom Road, Laguna Hills.