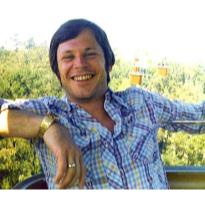 Edward was the middle son born to Edward W. and Mary C. Hogan on June 25, 1952 in Peoria, Illinois. Being the middle child meant he had the attention of both older brother Joseph and younger brother Peter. As a boy Ed attended St. James Elementary in Arlington Heights Illinois. He remained friends with several classmates for his entire life. Ed also attended St. Augustinian Academy in St. Louis at a teen. Joe proved to be a partner in crime and participating sportsman with through his college years. Joe thought he’d lost his best friend when Ed met and fell in love with Chris Biasco during his junior year of college at St. Louis University, where he received a bachelor’s degree in psychology. Married on Ed’s birthday in 1975, Ed and Chris entered a union lasting over 30 years. Ed and Pete both grew up to be well respected stockbrokers. During their careers they constantly shared and challenged each other’s philosophies and ideas

Ed and Chris began their life together in Glenview , the perfect place to start a family. Daughter Christel was the first to arrive of the Hogan children. Erin soon followed and the new parents were ecstatic. A few years later the firstborn son Patrick arrived and one short year later daughter Kelly. The proud father of four was a loving example of a family man, cherished by all his children.

In 1986 the Hogan family relocated to Scottsdale Arizona, new job and new opportunities. Shortly after settling in came the diagnosis of Multiple Sclerosis for Ed. The family flourished in Arizona and although Ed had difficult times he maintained a great attitude. His commitment to his children never faltered and he was actively involved in their many activities. He and Chris made many great friends, and enjoyed summer barbecues and card nights often. During these busy years, Ed obtained a Master’s degree in counseling from Arizona State University in 1994. He also studied painting, following his fathers love of art.

As the disease advanced Eddie was not discouraged. He participated in golfing and fishing outings with his many lifelong friends. Eventually the heat of Arizona moved the family to the mild climate of Southern California. In 1996 the Hogan’s moved to Laguna Niguel, California joining family members already settled in the west.

Southern California provided the family a new beginning and opportunities. Along with that beginning came two grandchildren, Avery Hogan and Evan Grall. Eddie, with his own children growing and heading off to college, cherished the relationships with the grandchildren. They were two little jewels in his life. In his eyes, they were the most precious grandchildren ever!

Ed’s gregarious and friendly nature coupled with an Irish Catholic background resulted in a large circle of family and friends, who will all remember fondly his blessed but all too short lifetime.

Everyone who met Ed will never forget him! He lived a life of integrity, laughter, intellect, love and smiles. His sense of humor was unique and ever present in his daily life. A smile was on his face always, even in the hardest days.

Ed is preceded in death by his parents Ed and Mary Hogan and brother Peter Hogan.

In lieu of flowers please send donations to:

The Boys and Girls Club of Laguna Beach