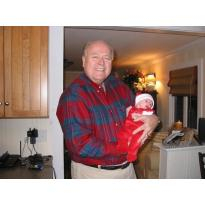 Ned Van Rensselaer was born in Glendale, California September 23, 1937 the son of Mary and Thomas Van Rensselaer. His early singing career began with folk music and calypso groups such as ?the Lifeguards?, ?the Statesman?, ?The New Christy Minstrels?, and later a crossover country western group called ‘sierra Highway?. He also was an actor appearing in such plays as the ?Male Animal? at the Pasadena Playhouse, in ‘sound of Music? in Orange County as Captain Von Trapp, and in the Walt Disney series ?Andy Burnett? in the lead role.

After earning a Master’s degree at USC, Ned became a strong supporter of the USC football team and a member of Cardinal & Gold. He also attended LA State College and Glendale Junior college, earning degrees in business.

Ned Van Rensselaer was the co-owner of Financial Marketing Corporation, an exclusive representive for Evergreen Development, and marketed their Tenant In Common programs to NASD broker/dealer firms throughout the United States. He also owned an interest in a small broker/dealer firm called CNP Securities, Inc.

Ned was very proud to serve two terms as President of the ‘Roosters’, a non profit organization that continues to raise funding for numerous children’s charities in Orange County and feeds over 1, 500 needy families each year through its food drive at Christmas time. He used his business and entertainment experience to help those less fortunate and in so doing shall be sorely missed. The family asks that donations be made to the Roosters Foundation food drive in Ned’s name at www.Roosters.org click the ?Holiday Food Drive? button.

Ned was a devoted and loving husband, father and grandfather, and will be greatly missed by all whose lives he touched.

Family and friends are welcome to join us at the family home following the Celebration of Life.