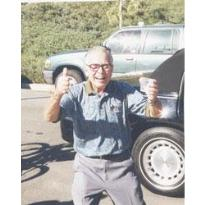 Col. Edward L. Brady, USAF Retired.
Ed Brady, 86, passed away peacefully on Sunday, January 8, 2006 with his family by his side. A native Californian who returned home in 1964 after serving 23 years in the Air Force, Ed started his second career at TRW, where he retired in 1985 as Business Manager for the Space and Electronics Division. He was a proud member of the classes of Loyola High School ’37 and Loyola University ’41, and received his MBA from George Washington University in 1957. During the 1970’s, he served as President of Loyola University Alumni. Ed was a lifetime member of the Knights of Columbus, an avid volunteer for Catholic Charities, and beloved parishioner of St. Anastasia Catholic Church in Westchester. He was a dedicated husband, father and grandfather, who taught by example the importance of integrity and a strong work ethic. He made friends wherever he went, displaying his considerable Irish charm and wit. Ed loved to spend time with his family and friends and especially enjoyed attending Loyola High School football games. We will always cherish his unending love and spirit. Ed Brady is survived by his two sons Bill and John, his daughter Elene, his grandchildren Patty, Meghan, Taylor, Sean, Shannon, his brother Father John Brady S.J., and his sister Bernice Medinnis.

A Funeral Service will be held on Saturday January 14, 2006 ~10 A.M. at St. Anastasia Catholic Church in Westchester, Los Angeles, California.