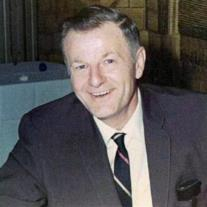 Edward J. Majewski (Ed) was born in Chicago, Illinois on September 6, 1915, the youngest of eight children to parents who had emigrated from Europe to the United States in search of a better life for their family.

Growing up through the depression years, Ed answered his country’s call at the beginning of WWII, joining the army and serving the next four years through the end of that war. A decorated veteran, Sergeant Majewski received the Bronze Star for meritorious service during the Battle of the Bulge in France. Ed is one of those unique veterans who fought in both the European and Pacific theaters, also serving during the liberation of the Philippines.

On August 23, 1941, Ed married his sweetheart Connie, having met at the Paradise Ballroom in Chicago in 1939. They were inseparable the next 68 years until God called Connie home on May 5, 2010.

Ed and Connie are survived by their three sons, Tom, Jim and Rick, 16 grandchildren and 9 great grandchildren with number 10 on the way. They were reunited on Veterans Day, November 11, 2015, two months after Ed celebrated his 100th birthday. We love you and miss you both dearly. Together once again, resting in God’s Peace.