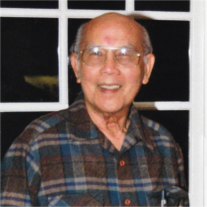 Edward was born in Magelang, Indonesia. He grew up in Yogjakarta, attending a Roman Catholic elementary school, and then attended Queen Wilhelmina School in Jakarta. He was employed by the Dutch Railroad Co. in Indonesia.

At age 19 he was drafted by the Royal Dutch Navy where he served for eleven years. On February 27, 1942 he participated in The Battle of the Java Sea on the Hr. Ms. De Ruyter. He was captured, and remained a POW for 3 1/2 years including working on the Burma Railway in Thailand.

Upon returning home from the war Ed married Gusta Cornelia Frieser on March 21, 1947 and lived on the island of Belitung where he was employed by the Billiton Mining Co.

Ed and Corrie’s five children, Yvonne, Sonja, Ernest, Lydia and Jan-Willem were all born in Indonesia. In 1958 they emigrated to the Netherlands where Ed worked as an instructor for a boys technical college in Breda.

In 1961 Ed and his family emigrated to the United States of America and settled in California. Edward worked for the Southern Pacific Railroad and for Kaiser Steel.

Ed and Corrie resided for many years in Covina where they raised their children. Following Ed’s retirement, they relocated to Laguna Hills.

His beloved wife Corrie passed away on April 12, 2009. Ed is survived by his 5 children, 8 grandchildren and 10 great-grandchildren. He will be greatly missed by all and fondly remembered for his kindness, generosity and strength.

Funeral services will be held on Saturday, April 8 at 11am at St. Nicholas Catholic Church in Laguna Hills.

In lieu of flowers, donations can be made to St. Nicholas Catholic Church.