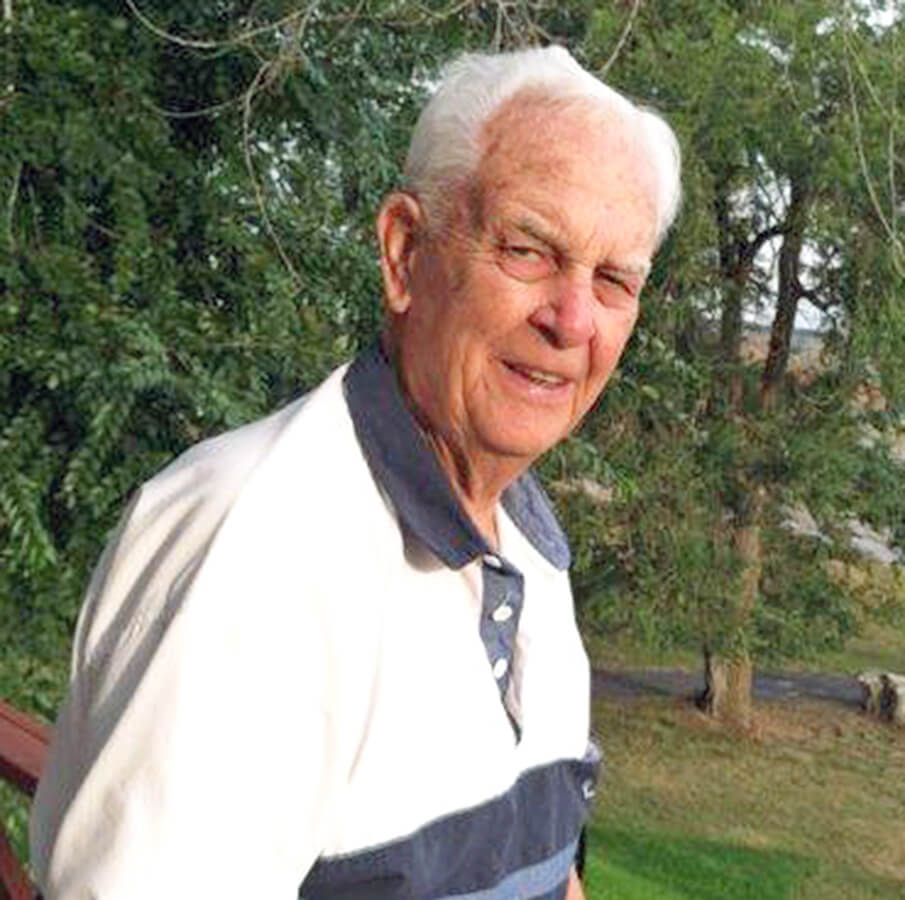 Doyle Weston Wilson passed away on Jan. 18, 2018.  He was born on a ranch north of the Black Hills and rolling plains of Northwestern steppes of South Dakota on November 6, 1924 to his parents, Louis Wilson & Mabel Petersen of English, Norwegian & Irish decent, 5 years before the Great Depression in a house his grandfather built

He lived through the depression during which most of the ranch was lost, especially after raging blizzards took the lives of many of their cattle. Life was hard in the frozen northern plains. He literally had to walk miles through the snow to a one room schoolhouse to get his education and graduated high school with only 11 other kids in his class.   With the large ranches, homes were sparse and distant.

He married his wife, Emma Denzen after leaving the ranch, seeking his own self-identity and entering the US Army Air Corp. towards the end of World War II. He was getting in some of his studies for the Air Corps at St. John’s Seminary in St. Cloud Minnesota. He worked in a small garage in Buckman, Minnesota the town where my Emma was born, working as a mechanic and selling Ferguson tractors, and Chrysler cars. They met at the church bazaar. Emma was born in a small farm in a small German Catholic community. Dad was raised Lutheran. Both were raised with good moral and work ethics. They profoundly loved and fed off each other for the 66 years of their marriage before Emma’s death in 2013. He was baptized Catholic before their marriage in 1947, and I might add that their marriage was very special in that they had a double wedding. Emma’s sister Cecilia and Lawrence Otremba, were married at the same ceremony at St. Michael’s Catholic Church in Buchman, Minnesota, a small church the German settlers, including Emma’s father, Peter Denzen had built  The families would always remain close.

After their first two children, Deanna and Judy were born in Little Falls, Minnesota, they moved in 1954 to Compton California. Doyle was a welder by trade. He had learned to weld in St. Cloud and worked on the docks in San Francisco after the war. When he was in the service he was stationed at Santa Ana Air Corps station which is now called Orange County Fairgrounds. One can still see a fragment of the Army barracks there. Knowing this area, made him familiar enough to settle his family here and bring his welding skills to a soon budding aerospace industry. Doyle had the highest of skills in welding, working for many companies including North American Rockwell. It was there he worked and welded on the engine of the second stage of the Apollo 11 rocket that went to the moon. After moving to Compton he was not done fine-tuning his skills. With his great work ethics and determination he studied the building codes to be able to build his own house on the lot next door to where we lived. He had learned drafting in high school, so he even made his own plans. He went on to build a duplex in Lynwood and a house in North Long Beach.

Their son, Theodore was born in 1958 in Compton California. Compton was isolated from the city of Los Angeles back then. There were fields in between the two settlements. Compton had been the center of the Town Hall Party, a radio broadcast at a country-western entertainment venue that resided in the city. Many known country-western stars were known to have performed there including Gene Autry, Merle Haggard, Patsy Cline, and Hank Williams. Growing up on the ranch, Doyle was very fond of country-western music and would often take Emma and the girls to go see the shows.

In 1962 my Doyle moved the family to a new community developed from bean & strawberry fields called “Fountain Valley”. Throughout the next 8 years they enjoyed many trips to Minnesota to visit my mom’s relatives.  Doyle would send to Minnesota a trunk, mom and the kids off on the Santa Fe Super Chief Streamliner, while he stayed home working and building. He built up the upstairs bonus room of the house to include an office, bathroom, bar, and entertainment center for dancing.  He loved music, making each sure each of the kids learned to play an instrument.  He loved taking the family out to eat and enjoyed taking Emma & his son to Angel games.

Continuing his welding while receiving income from the rentals of his buildings, he was able to purchase lots in the new growing community of Dana point in 1970. The area was vacant back then.  The harbor was just being built.  Doyle and his son Ted built three duplexes on Alcazar Drive. Being a jack of all trades, he bought a backhoe, digging and laying foundations and building brick retaining walls, framing, plumbing, electrical, and drywall work. He did all the finishing work as well. He even designed the floor plans, and drawings on a desk in his Fountain Valley garage.  About the only thing that he did not do was grade the lots, the roofing and the stucco. To help fund his building, he sold his assets in Fountain Valley, Lynwood and Long Beach. Then the family moved to Dana Point. He finally lived in a house that he built just as his grandfather did!  At this time St. Edwards was a small little church in Capistrano Beach where we attended mass. Dad had discovered this area during the many trips down the two-lane highway from Fountain Valley to San Juan Capistrano to look at property and to go to church at the old Serra Chapel.  He learned about the new harbor going in and knew the potential for growth that this area held. He was truly a pioneer as his grandfather was. He was one of the first builders in Dana point. Doyle had a keen eye for good investing, never fearing hard work.  He volunteered his work in the building of the school here at St. Edward.

It was hard when he lost Emma. And though his dementia and his deteriorating health was trying for him, he never complained of it. He loved being around his grandchildren, and he especially loved little children.  He loved Angels baseball, music, especially country-western, golf and working hard with his hands. He was an innovator, a hard-working man who never gave up!  And, what’s more, he loved life.

His children share sentiments in their regard for teaching them courage, respect, responsibility, discipline and truthfulness.  For these, they are truly grateful!

He is Survived by: