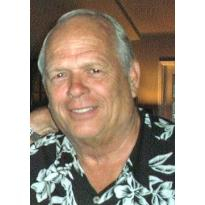 Douglas Gray George, born on May 23, 1940, passed away on Saturday morning at home with his loved ones after a courageous battle with lung cancer. He was born in Enid, Oklahoma and raised in Wichita, Kansas. He married the love of his life, Julianne, in 1963. After receiving a degree in Chemistry at Wichita State University, he was hired by Dupont. Working first as a chemist and then in sales, he gave 25 proud years to this company. He was transferred to southern California in 1970 and then moved to Mission Viejo in 1976, where he lived until his death. In retirement, he worked as a tax preparer. Despite his many achievements, he was most proud of his five sons, Scott, Stephen, Sam, Seth and Spencer. He lived to be with them and loved most watching them play soccer. Doug, a beloved husband, brother, father and grandfather will forever be remembered for his charming wit, his love and devotion, his wisdom and his authenticity. He was one in a million and will be sorely missed by his family and many friends. He is survived by his wife, Julianne, his brother, Dick, his sons, Scott, Stephen, Sam, Seth and Spencer, and his ten grandchildren, Machaela, Gwyneth, Faith, Cassidy, Mackenzie, Hunter, Corey, Jack, Charlie and Caylee. Funeral services will be held at 11 AM, Thursday, June 7, at San Francisco Solano Church in Rancho Santa Margarita.