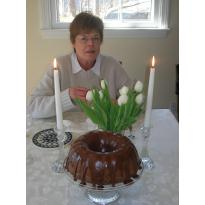 Born in New Britain, Connecticut, to Bronislaw and Pauline Gadomski Grala, Dorothy graduated from Mary Immaculate Academy Class of 1959 and Hillyer College, University of Hartford, to which she had won a full four year academic scholarship and became a member of the Delta Phi Alpha Sorority. Dorothy was the first woman, in fact the first person, in the family to get a college degree.

Dottie has been a resident of Orange County for 36 years. She was an avid volunteer, and during her years in Mission Viejo, was a passionate communicant and volunteer at St. Killian’s Roman Catholic Church, serving as a CCD instructor, Eucharistic minister, and a member of the Stephen’s ministry. She was a constant, stabilizing influence in the Women’s Kairos ministry, working in Victorville, and was an active coordinator for the Cursillo ministry.

Dottie had been in the insurance industry for over 25 years. She worked for Safeguard Healthplan, first HMO Dental company in the United States, and played a critical role in the establishment of the regional office which was the first office to contract with over 1, 000, 000 members. She also helped establish a regional office for Western Dental Insurance Company, where she earned top salesperson of the year for two consecutive years. She has been most recently affiliated with Aflac Insurance. She qualified for the majority of the first year Aflac ‘Rookie’ awards. She was dedicated, loyal, and extremely supportive to her manager. She loved helping clients, and had a ‘do what ever it takes’ attitude, sometimes driving to remote areas to see her clients at 4 am and doing paperwork on the hood of her car with headlights on for the only source of light.

In Dottie’s rare spare moments, she enjoyed a good round of golf. She also enjoyed vacationing ‘back East’ or traveling with her sister and brother-in-law. She was firm to her Polish heritage, and enjoyed keeping the holiday traditions, especially ‘Vigielia’ at Christmas.

Dottie was much loved and will be sorely missed by so many.

A Memorial Service is planned for March 11, Friday evening 7-9 at the O’Connor Mortuary on Alicia Parkway. A Funeral Mass will be held at St Killian’s Roman Catholic Church at 10:00 am Saturday, March 12, 2011.

Burial will be at the convenience of the family at a future date in New Britain, Connecticut.