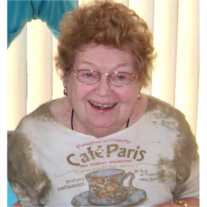 Jane was born in St. Louis, MO, and moved to Los Angeles with her mother Stella and sisters Mary Anne and Jacqueline in 1952 and was later joined by her brother Richard. She worked at Hughes Aircraft in Culver City until her retirement in 1987. She then moved to Mission Viejo and enjoyed playing bridge multiple times per week, traveling with her sister Mary Anne and brother-in-law Joe, going out to dinner and the movies with her best friend Marie, playing her piano and harp, and singing with the Saddleback College Choir. One of the highlights of her retirement was traveling with the choir to the Vatican to sing at a papal mass for Pope John Paul II in 2001.

Jane was a truly talented painter and musician. Her large canvas acrylic and oil paintings were brilliant displays of her artistry. She played the piano for all who came to her home and for the pure enjoyment she derived from it. To her family and friends, Jane was a lover-of -life. She had a great sense of humor, was always happy and thoroughly enjoyed everything she was doing. As she advanced in age and needed the help of caregivers, they enjoyed the fact that she was always singing and never complained. Jane was a truly lovely soul who was sweet to everyone. She was fun, she was cool and she was dearly loved.