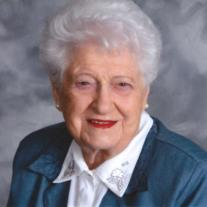 Dorothy J. Dodds, 98, of Laguna Woods, California, passed away peacefully on June 11, 2015 of natural causes. Dorothy was born in Lexington, Missouri on July 9, 1916 to Mr. and Mrs. Ralph R. Johnson, the oldest of three children. The family relocated to California, where Dorothy met her future husband, Robert (Bob) Dodds. Dorothy and Bob were married in 1941 and settled in Inglewood to raise their family. Dorothy enjoyed many interests including a career in the retail industry.

Dorothy was active as a volunteer in many service organizations such as PTA, and was especially proud of her participation in the Philanthropic Education Organization (P.E.O.), where women celebrate the advancement of women. Another one of her favorite hobbies was playing Bridge with her cherished friends.

Dorothy and Bob retired in Laguna Woods and enjoyed many wonderful years of leisure and travel to exotic places especially Europe and Asia. She was preceded in death by her beloved husband, Bob, and her brother and sister. Dorothy leaves behind her two daughters, Cheryl Ryan and Connie Schreiber; her son-in-law, Mike Ryan; four grandchildren and ten great-grandchildren.

A memorial service will be held on Friday June 19, 2015, at 1:00 p.m., at O’Connor Mortuary in Laguna Hills. In lieu of flowers, the family has requested that remembrance gifts be made in Dorothy’s honor to Hospice of Saddleback Valley at Saddleback Memorial Medical Center, 24451 Health Center Drive, P.O. Box 8000, Laguna Hills, CA 92654-9974, or online at https://memorialcare.thankyou4caring.org/sslpage.aspx?pid=376. Donations made in Dorothy’s name will be transferred to Hospice of Saddleback Valley.