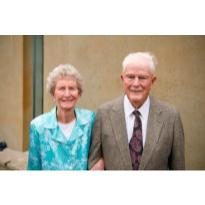 Dorothy Voigt was born on April 17, 1923 in Los Angeles, CA. She grew up in the city of Montebello. As a young adult, she worked for Sears and Roebuck as an accounting clerk. She also worked for Union Pacific Railroad, and joined the U.S. Navy WAVES in 1943. She trained at Hunter’s Point in New York and began her tour of duty in Seattle, Washington. She was stationed at the Naval Receiving Station as a Yeoman, first class. During this time, she met Robert Murray, who was also in the U.S. Navy.

Upon discharge from the Navy in 1946, she returned to East Los Angeles and worked for the telephone company. In 1947, she and Robert were married. They lived in Montebello for 7 years, during which time, Robert attended and graduated from USC. The first two children, Kevin and Timothy, were born before they moved to a new home in Downey.

By 1963, two daughters, Kerry and Kathleen, were born. Dorothy volunteered as the school librarian and on the PTA. She then worked part-time as a clerk for the Parks and Recreation Dept. in the city of Downey. After retiring, the family moved to San Clemente, CA, where she has resided for the last 14 years. Bob and Dorothy have been married 64 years and have 7 grandchildren.