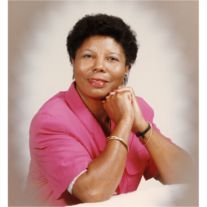 Doris Sinclair, a Wife, a Mother, a Woman of Sacrifice

Doris was one of six children and grew up to be the trailblazer in the family as she emigrated to Canada in 1968, leaving her young sons in the care of their father, and departing from her husband, John, to make a better life for all. While living in separate countries, Doris and John maintained focus on their goals to reunite along with their children as soon as possible.

Doris moved to New York City in 1969 and worked tirelessly at three jobs to secure her place in America and bring her husband and children to join her in 1974, 1976, and 1978, respectively. Once she had her immediate family together, she sponsored her siblings and continued to build toward a stable future.

She faced many challenges of rental living and finally afforded her first 4-plex in the summer of 1980 after being burned out of their apartment for the last time. Life became sweeter after this as she built upon her strong foundation, buying more properties and instilling the importance of hard work and responsibility in her children. She proudly watched as her kids achieved honors, medals, recognitions, and scholarships – all a result of the value of hard work and commitment she taught them. Doris was most happy when watching her family grow and flourish.

She was accomplished in achieving her goals, she was kind, and full of happiness and joy – all a result of her independence, strength, and love of family. Wanting to remain independent, she was resistant to leaving New York City, the place she had called home for 47 years. But after years of considering California as a place to live, so she could be close to her sons, she took the leap, yet again demonstrating her forward thinking and passion toward her family. Her last year of life, Doris enjoyed sharing in the joyous occasions and fruitful living.