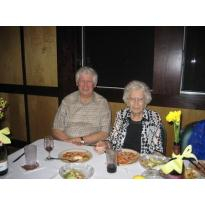 Died on August 12, 2010 and resided in Laguna Hills, California

Doris June Meyer was born on August 28, 1925 in Chicago, Illinois. Doris was the third of four children of Patrick McCauley and Eleanor O’Rourke.

While working in downtown Chicago, Doris met the love of her life and future husband, Eugene Gene Meyer, a certified public accountant. They married on June 11, 1949 in Chicago. Doris was a loving wife and homemaker for 61 years. Together they raised their four children in the Chicago area. Gene’s company relocated corporate headquarters to Rancho Bernardo in 1978, and they enjoyed the past 32 years in Southern California.

Doris loved her four children, their spouses, and all of her nine grandchildren very much. She was a devout Catholic, and was always proud of her Irish heritage.

She suffered a reoccurrence of breast cancer, and courageously fought the disease for nearly three years.

In lieu of flowers, a donation can be made in Doris’ name to Catholic Charities, or to Mercy Home in Chicago, located at 1140 W. Jackson Boulevard, Chicago, Illinois 60607.