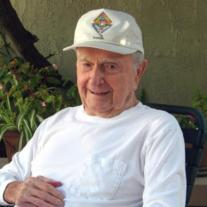 Don was born in Kansas City, MO on April 9, 1917. He graduated from Rockhurst High School in Kansas City, where he lettered in baseball, basketball and track. Throughout his youth, he worked for his father at Walsh’s Market. He met his future bride, Dorothy Schelstrate, while delivering groceries to her family’s home. They were married in June, 1940. The two of them set off on a lifetime of adventures eventually moving to California in 1950, and settling in Arcadia to raise their family of six children.

Don fought in the US Army during World War II. He was part of an Anti Aircraft Artillery group in Europe, offering artillery backup during the Battle of the Bulge, then fighting their way through Belgium and Holland, to the Elbe River in Germany. As was true of many in his Greatest Generation, Don did not talk much about his military service, but we knew it was a proud and defining part of his life.

In his business life, Don built/bought/sold carwashes. He was a self-made man in every sense, proud to never have had a “paycheck” from anyone else. He and his brother, Bern, built the first “automatic” carwash in Southern CA, in San Gabriel, 1951. It was called WALSH AUTO WASH, and became a model for carwashes throughout the country. Don continued, with various partners, to build/buy/sell carwashes throughout Southern California, until he retired.

Dorothy and Don were fortunate to have an extensive group of friends in Arcadia, through Holy Angels Parish. They were always ready for a party. Everyone had lots of kids, and the pool parties, 4th of July celebrations, and Halloween parties were legendary.

Travelling was Don and Dorothy’s favorite pastime. They ventured many times to Europe, and visited Russia and the Scandinavian countries for their 50th wedding anniversary in 1990. They also traveled extensively in the US, visiting all 50 states. Don had a passion for maps and geography, and used to say, “How can you ever go there, if you don’t know where it is?”

Don loved Baseball. He played throughout his life, but really focused on Senior Softball from age 60 to 85. He pitched for many years, but he could play every position; First Base was his favorite. He played baseball all over the US and in Canada, on many championship teams from Southern California, earning 8 Senior World Series Rings. His bat bag was always in the trunk of the car, ready for a game anytime, anywhere. Whether watching a game on TV, attending his grandkids’ games, or visiting famous ballparks around the country, Baseball was the joy of his life. Mostly, though, he loved to play.

Don will be missed for his twinkling blue eyes and his Irish sense of humor – always ready with a story, a pun or a laugh. He was the patriarch of a large brood who loved him dearly.

The family requests that in lieu of flowers, donations may be made to: The Alzheimer’s Association (alz.org).