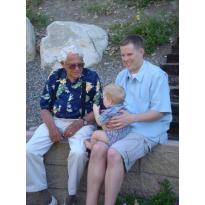 Don was born in Park Rapids, Minnesota to Harvey and Ida Wright. He grew up in Park Rapids and graduated from Park Rapids H.S. in 1934. He spent two years in the CCC and four years in the construction business prior to joining Battalion G of the National Guard. On February 10, 1941 he was called into active service where he served as Ordinance Recovery Officer lieutenant with the 78th Infantry Division in Europe. During his service he was awarded the Purple Heart and Bronze Star. He was separated from the service Army in November 1945. On July 7th, 1942 he married Sussie Christensen in Oakland, CA.

He was owner and operator of Compton Store Fixtures in Compton, California for 30 years, a business which designed and manufactured custom store fixtures. Upon his retirement he sold real estate for 10 years, ?for fun?. He and wife, Sussie raised their four children in Compton and Long Beach, CA. In 1991 he and Sussie moved to the pine covered hills of Prescott, AZ where they built a new home. They moved back to Laguna Hills, CA in 2004.

Don loved his family, trailering, woodworking and his church. He was a lifelong Baptist, raising his family and attending Calvary Baptist Church in Long Beach for 40 years, then Bethel Baptist Church in Prescott Valley, AZ. Don once wrote, ?My wife, kids, grandkids, great-grandkids and all of their spouses mean more to me than anything else in this world. I pray everyday that God will watch over them and that we will all spend eternity together in Heaven?. He would like us all to remember the promise of John 3:16? ?For God so loved the world that He gave His only begotten Son, that whosoever believeth in Him should not perish, but have everlasting life?.

He will be greatly missed and forever in our hearts and memories.