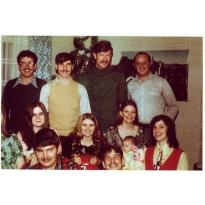 Donald L. Herkenhoff was born November 2, 1949 in Minnesota, and lived in Southern California for the last 30 years raising three daughters with his best friend and wife, Deborah. A gentle, loving husband and father, he was a master carpenter by trade, owning his own business until he began a 17 year battle with cancer and heart trouble. Though illness took his health, it did not take his ability; he continued to create beautiful pieces everywhere we look we see the work of his strong, skillful hands. Through a myriad of illnesses, he continued to battle, never complaining, until he finally stepped into heaven May 17, 2008 at Mission Hospital at the age of 58. We are grateful to the Lord for allowing him to be with us for so long. Don is survived by his loving wife, Deborah; daughters, Heather Joshua Martin; Nicole Jeffrey Stoner and Sara David Schaaf; parents Boniface and Sylvia Herkenhoff; brothers, Stanley and Douglas Herkenhoff of Minnesota; his grandchildren who adored him, and knew him as ‘Bumper’: Jasmine and Jericho Martin, Casey and Devon Stoner, and Emma Schaaf; and his little dog, Andy. He will also be missed by many friends and neighbors.