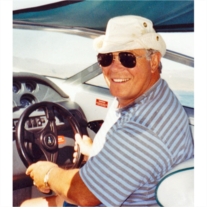 He was born to Ethel and Thomas J. Vaughn in Los Angeles on January 7, 1932. Don attended Fullerton Union High School where he played varsity football on the league winning championship team (Indians). He attended Santa Clara University on a football scholarship and he graduated in the class of 1954 with a Bachelor’s degree in Business.

Don married the love of his life, Phyllis Rae Roberts, on October 9, 1954. They were married for 57 years. Don and Phyllis began their family in Fort Sill, Oklahoma where Don served as an officer in the United States Army in the Artillery division. After his service in the army, Don and Phyllis returned to Southern California where he began his career in the field of insurance.

Don was a devoted father and husband, and he was an active member of his church and his community. He was one of the founders of the Junior All American Football program in Mission Viejo, and he coached his nephews in the Pop Warner Football program (Antelopes).

He was a recreational pilot and an active member of the Aviation Country Club where he served as president for a term. Don and Phyllis enjoyed many adventures together to places like Alaska, Mexico, Europe, and South America, but one of their most treasured places to unwind with family and friends was Lake Mohave, Nevada.

Don was also a man of faith who was dedicated to Abiding Savior Lutheran Church. He served as an administrator for the church and played a vital role in the building of both the church and the school.

Our family is very grateful to all of the caregivers and the Hospice team that have cared for Don over the past couple of years. Thank you for your dedication, love, and support.

Don’s life will be remembered and celebrated on Saturday, November 18, 2017 at Abiding Savior Lutheran Church located on 23262 El Toro Road, Lake Forest, CA. The service will begin at 11:00 a.m. with a lunch reception to follow.

In lieu of flowers, please give to a charity of your choice. Don’s favorite charities were Wounded Warrior and the National Parks.

“To fall asleep believing and wake in heaven with thee.”