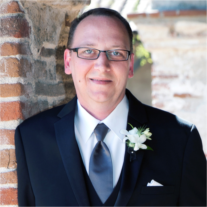 Donald James Robbins, San Juan Capistrano, California and of many years in and around Pittsville Wisconsin, aged 43, passed away suddenly Saturday, February 11 2017 after an incredibly courageous and very long battle with complications from chronic lyme disease. He is survived by his husband, Darren of 1 ½ years but proudly as partners for almost 16 years; and his immediate family of father Don, sisters Shirley and Kathy, and brother Ed. Many other families and friends will miss him dearly.

Don – known to some as Donnie or Donald – was a devoted husband and partner whose greatest pleasures were in traveling, spending time with his husband and family, and his beloved dogs (his close companions in his days of illness).

Don spent his childhood in and around the area of Pittsville WI. After graduating Pittsville High, he qualified with Certifications as both a Phlebotomy Technician and Emergency Medical Technician over a number of years and worked both as an EMT and at the Marshfield Clinic as a Laboratory Phlebotomist and an Anesthesia Technician.

Bitten by the travel bug he joined the airline industry in a local regional airline as a flight attendant with Mesaba Airlines. He then proudly joined the international airline – known as Northwest Airlines before its later merger with Delta. During the challenges that industry faced post 9-11, he also worked for Spirit Airlines and as a Medical Assistant in a family medical office.

He moved to start life with Darren in Atlanta, GA in 2002; they later moved with Darren’s work to Fort Lauderdale, Florida where he loved the sea air and the vast open views from his seaside balcony; two years in Sydney, Australia and most recently in Southern California. He enjoyed living in such diverse places and his global travels with work and many vacations with his husband, family and his close childhood buddy, Chris.

Don had a natural love of people from all walks of life that crossed his path; he was a natural giver of his time and all he could offer to comfort others facing difficulties in life and in pain. He was also widely known for his quick wit and his wide cheeky smile as he lit up a room with his sense of humor.

The family is shocked by his sudden passing but thankful that he is released from the pain of his illness and pray he is reunited with his departed mother Lucy and sister Wanda.

Two services open to family and friends will be available to mourn the passing and celebrate the life of Donald: Monday 20th February 2017 at 1pm a Funeral Service will be held near his home at O’Connor Mortuary, Laguna Hills Chapel & Crematory, 25301 Alicia Parkway, Laguna Hills CA 92653; and on Saturday 25th March a Memorial Service will be held 1pm at the United Church of Christ 8229 Jackson Street, Pittsville WI.

Floral tributes can be sent to O’Connor Mortuary, Laguna Hills Chapel & Crematory, 25301 Alicia Parkway, Laguna Hills CA 92653. Monetary donations in lieu of flowers can be sent to Donald’s favorite charity the ASPCA (www.aspca.org) or to any of the great Lyme Disease Research charities such as the Lyme Disease Clinical Research Center at Johns Hopkins (go to https://secure.jhu.edu/form/rheumato and choose the Lyme Disease Clinical Research Center Fund in the menu).