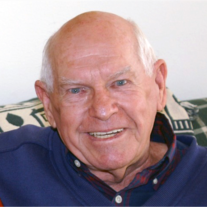 Don was born on 02/26/28 in Burlington, Iowa, where he lived until relocating to California in 1964. He was an avid athlete from childhood baseball (where he earned the nickname “Dixie”) through his work as a senior PGA pro, including play on the Burlington Junior College state champion basketball team in 1946. During his years as a secondary school educator, Don enjoyed his work as a high school coach in the fields of baseball, basketball, football, and golf. He proudly wore the purple BHS greyhound jackets the rest of his life.

Dixie enlisted in the US Army in 1945 at age 17 and served until discharge in 1946. He then married the true love of his life, Mary Kathleen Eversman, who preceded him in death in 2010. He and “Peggy” were married for 61 years and extended their love to their children – Donald, Katherine, David, and Timothy. He is survived by 10 grandchildren – Natalie, Adrienne, Dana, Joseph, Jonathan, Drew, Alexander, TJ, Meghan, and Matthew and 4 great grandchildren – Adeline, Henry, Finn, and Isla. He will be sadly missed by all of those who loved his smile, dignity, and character.

Visitation and rosary will be at O’Connor Mortuary in Laguna Hills on 8/13/17. Funeral services will be held on 8/14/17 at La Purisima Catholic Church followed by burial at Holy Sepulcher Cemetery in the city of Orange, California.