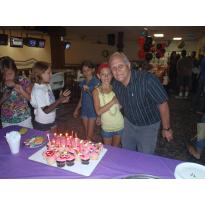 Donald Earl Bell passed away suddenly Friday, July 1st at Saddleback Hospital in Laguna Hills, CA. at the age of 65. He was born in Texas City, TX, the son of Lamon & Wonnie Hayes Bell. Don was raised in the Church of Christ, graduated from Clear Creek High School in League City, TX, attended the University of TX at Austin; and then served in the US Navy before moving to CA in the 60’s. He was a medic in the Viet Nam war. He was employed first by Mission Hospital and then moved to open Saddleback Hospital as a surgical technician in the operating room and worked there for 37 years. He loved every day of it.

Don was a musician who loved playing his guitar every day. He played music with his friends in a band called ‘Diamonds in the Rough’ and would do cameo appearances with the ‘Barrelhouse Rockers’. He was very artistic; did calligraphy, drew cartoon animals on paper tablecloths during dinners out, and wrote songs for family special occasions. He also loved science and was active in Boy Scouts, earning the Order of the Eagle, and became his son’s den leader. As Astronomy was his passion, Don traveled many times to see a solar eclipse and did astrophotography. Besides the stars, he also was a passionate photographer of family. He managed the photos on the computer and did all the videotaping. He did gymnastics in high school and he and his sister Linda were one of the first Houston Oilers’ cheerleaders. His love of the ocean kept him in California; living by it, going surfing, sailing trips and fishing. He also was a collector of bugs and butterflies and was thrilled to have a son to share them with. He was a jokester, a comedian and loved to make his children laugh.

Don is survived by his wife, Elisa, whom he married in 1994, and was most proud of their two beautiful children, Ethan 15 and Sierra 10.

He is also survived by his mother Wonnie Morgan of Belton, TX, siblings Linda Jeter of Katy, TX, Marcia Vineyard of Alvin, TX and Larry Bell of Houston, TX., as well as nephews David, Stephen, and Michael in the US Army serving in Afghanistan, nieces Nicole, Adriana, Leah, Hannah, brother in laws Craig, Eric, Rocky and Mike and sister in law Patricia. Besides his family, he is also survived by many, many friends from Saddleback Hospital, AA24 years sober, band mates, neighbors, kid sports parents, birthmothers of his children and pretty much South Orange County.

A memorial service will be held at O’Conner Mortuary in Laguna Hills, CA at 1:00 pm on Monday, July 11th. In lieu of flowers, please send a donation to the Ethan and Sierra Bell Memorial Fund in care at Wells Fargo Bank or in care of their mother, Elisa Bell at 24 Calico Court, Trabuco Canyon, CA 92679. Donations may also be made through Paypal see Charities button on left for direct link.