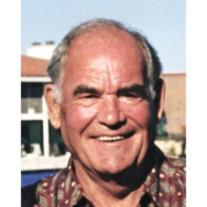 Donald Foell, beloved father, grandfather, and brother, age 79, died suddenly in his home in Laguna Hills of heart failure on January 7th. He was born on May 10th, 1932 to Oswald and Fern Foell, dairy farmers in Winona, Minnesota.

Don lived in Minnesota until the age of 15 when he and his three brothers, Jerome (Jerry), Leland (Jack), and Gary moved with their parents to Costa Mesa, California. He graduated from Newport Harbor High School in 1950. Shortly thereafter, he entered the Army in November of 1952. After basic training, he was sent to Korea to fight on the front lines as an infantryman in Headquarters Company, 14th Infantry Regiment. In July of 1953 he was wounded in action and was sent to an evacuation hospital in Japan for surgery. In 1954, he was honorably discharged from the army and was awarded a Purple Heart, Combat Infantry Badge, Good Conduct Medal, UN Service Medal, Korean Medal with 2 BSS, and a National Defense Service Medal.

After returning to the states he married his high school sweetheart Lynn Smith and bought a home in Costa Mesa, near his family. During that time he worked briefly for the Orange County Sheriff’s Department and then was employed at the Orange County Fairgrounds as their Head Grounds Supervisor. In 1956, his son David was born and his daughter Rochelle (Shelly) was born in 1965.

Around 1969, he moved to Silverado Canyon and fulfilled his desire to serve and help the public, becoming a volunteer fireman and rising to the rank of Captain. He continued to volunteer until he moved to Laguna Hills in 1979. By that time, he was employed with Moulton Niguel Water as a Heavy Equipment Operator. He worked for Moulton Niguel until 1985 when he retired as a Superintendent. He was honored as never using a sick day.

After he retired, he continued to work part-time jobs. He worked at Home Depot and was a valuable expert in many departments of their store. Most recently he worked as a Marshall for Aliso Creek Golf Course. Don enjoyed the opportunity to meet new people, see beautiful wildlife, and play golf for free!

Don enjoyed just about anything outdoors. He loved to golf and watch birds and other wildlife. He liked to camp and fish and attended regular camping trips with his three brothers every summer. He was passionate about watching sports on TV and in person. In his earlier days be participated in athletics on a regular basis and was an extremely talented baseball player and track athlete.

Don had a hilarious sense of humor and practical jokes were a common occurrence for him. He rarely took life too seriously and could be counted on to be the life of the party. Most who remember him comment on how funny and jocular he was most of the time.

Being one of four boys, Don relished the time he spent with them and participated in many romps and escapades. They were known for their card games and camping trips. They loved to BBQ and go out to eat. When the boys got together, they could guarantee everyone would have a great time. They played practical jokes on any unsuspecting victim and egged each other on to do so. They were more like best buddies than brothers and they cared for one another fiercely.

One of the biggest loves of his life were his pets. Most recently, he had a lab mix named Rudi, who unfortunately died just a month earlier than Don. His heart was saddened and he truly lost a dear friend.

Unfortunately Don was in poor health and his quality of life was dwindling. He had chronic heart disease since the early 1990’s but always fought to see another day. He remained active and entertaining and loving to his family, but the loss of his dog took a toll on his spirit.

His ex-wife Lynn, his younger brother Gary, and his dog Rudi preceded him in death.

He is survived by:
His son David and daughter Shelly,
Grandchildren Christine, Bryan, and Beckett
His two eldest brothers Jerry and Jack
And many other family members and friends who miss him dearly.

A memorial service will be held at O’Connor Mortuary in Laguna Hills on Sunday January 15th at 1:00 pm. The family will host a reception to follow at Don’s home in Laguna Hills.

In lieu of flowers, please send contributions to The Orange County Rescue Mission or The Salvation Army.