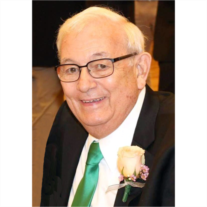 Donald Allan Albright, 81, passed away on 10/27/2017 after a courageous ten-year battle with colon cancer. He was at home, in El Toro, CA surrounded by family. Born and raised in Greenfield, Ohio, he was preceded in death by his wife of 58 years, Sarah Nicley, and granddaughter, Chelsea Buckley.

Don met Sarah Nicley, the love of his life, as a young boy. The two married in June 1957, started a family, and moved west to California in 1966. Eventually, they settled in El Toro, CA where they dedicated their lives to raising their family.

Don took a particular interest in the local history of El Toro and spent many years sharing his knowledge as a Docent at Heritage Hill Historical Park. An avid sports enthusiast, Don was especially fond of his Cincinnati Reds.

A dedicated son, husband, father, uncle, Poppa, and G-Pa, Don was most proud of his family. He is survived by his four children (Ann, Tim, Todd, and Teresa), 8 grandchildren (Ashley, Brian, Nicole, Scott, Allison, Taylor, Sam, and Shawna), and a great grandson, Kody.

Always loving, supportive, and a man of great honor, Don’s quiet strength and sharp wit will be deeply missed.

A family service will take place on Friday, November 10th. Interment will be at El Toro Memorial Park where he will be laid to rest next to his beloved wife. In lieu of flowers, please kindly consider a donation in Don Albright’s name to Amigos de la Colina.

2 responses to Donald A. Albright