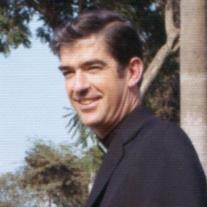 Born to Minerva and Lewis Kribs on Oct. 3, 1934, Rev. Don Kribs died on Sept. 19, 2015. Fr. Don attended Loyola High School and University, and was ordained in 1961. He served as parish priest for 15 years. His meeting with Mother Theresa in 1975 changed his life. He accepted the position of vice-chair of the Co-workers of Mother Theresa and represented her in the western region of the U.S. He devoted the remainder of his life to the poor, and particularly the sick poor, working on Skid Row in downtown L. A., and serving as head Catholic chaplain at L. A. County hospitals. He is survived by one brother, Robert J. Kribs; a sister, Charlotte A. Pidgeon; and four nieces.