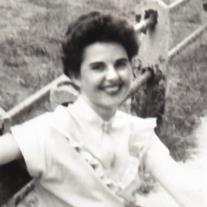 Dolores Cullen McGuinness, 83, devoted wife of Patrick McGuinness, passed away at home, in the arms of her beloved husband on October 19, 2014 after a lengthy and valiant battle with Parkinson’s Disease. Dolores and Patrick celebrated their 63rd wedding anniversary just prior to her passing.

Dolores was born in the Bronx New York to Daniel and Mary Cullen on September 28, 1931. She graduated from Cathedral High School in Manhattan.

Dolores, though petite in stature, had the heart and intestinal fortitude of a giant. She excelled at every task she performed whether as a Law Librarian on Wall Street, a housewife, a mother or a business partner and office manager for her husband.

She met Patrick when she was fifteen and he was sixteen. He joined the US Navy when he was seventeen and they continued their courtship, primarily through mail, during his four years in the service. Upon Patrick’s discharge from the military in San Diego, Dolores flew to California and they were married in St. Dominic’s Church in Eagle Rock, CA on October 6, 1951. They honeymooned on Catalina Island and then returned to New York. A year later she gave birth to their first son, Owen. In 1955 they welcomed their second son, Brian. In 1957 the family moved to California and resided in Eagle Rock. Both Dolores and Patrick worked for Pacific Telephone until 1961, when Dolores gave birth to their third son, Sean. Shortly after, Patrick became a Firefighter for the Los Angeles Fire Department. Following that, they adopted their fourth son, Seamus. At this time Dolores became a full time housewife and stay at home Mom. Her home became a meeting place for her sons’ friends and they were all welcome, however were required to obey the rules that were enforced by Dolores. Primarily no rowdy behavior and to clean up after yourselves.

Dolores kept a spotless home, provided meals to whomever might be there at mealtime and loved to see children enjoy themselves. The children responded to her love by being obedient and respectful of her wishes.

When her sons were grown and educated and Patrick had retired from the Fire Department they travelled extensively for a time and then they decided to start a business. Dolores, with her usual talent for organization, set up policies and procedures and effectively ran all daily operations. Due to her outstanding intelligence and work ethic, the business was a resounding success. The business prospered for over twenty years until she became ill.

Dolores was beautiful to the end, always a perfect lady and loved by all who knew her and admired by those who were just acquainted with her.

She is predeceased by her Mother, Father, three sisters, 2 brothers and son Brian.

In lieu of flowers, donations may be made to the Los Angeles Fireman’s Relief Association.

Eternal rest grant unto her O Lord.
May perpetual light shine upon her.
May she rest in peace.
May her soul and the souls of all
the faithful departed, by the mercy of God
rest in peace. Amen.