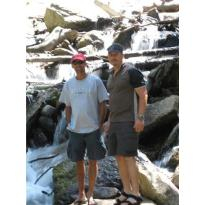 Derek Roberts was born to loving parents Don and Kathryn on May 26th 1965 in the city of Orange, California. Derek was a life long resident of Orange County and grew up in Tustin, attending the local schools and graduating from Tustin High School in 1984. He moved to Lake Forest, California in 1989 and resided there until he departed this life.

Derek was athletic throughout his entire life playing sports in his youth and continuing to play on Men’s Softball teams throughout his adult years. Derek was a hard working man and enjoyed his career as a grocery clerk in many local supermarkets. He enjoyed a 29 year career as an active member of the Retail Clerk’s Union and most recently worked at Albertson’s in San Clemente.

Derek’s loves were his family, friends and the outdoors. He met many of his friends skiing and hiking the local mountains and enjoyed special vacations to Yosemite, Bryce Canyon and Mammoth. He was an avid Lakers, Angels and Bronco’s fan and enjoyed getting together with friends and neighbors to watch games and grill tri tip. Derek was loyal to the Schipperke breed of dog and had two special friends in Bart and Chili.

Derek was called from this earth on June 30th at the age of 45 years old. We can now look to the local mountains and know that Derek is just a few steps ahead of us on the trail.

Derek is survived by his parents, Don and Kathryn Roberts of Banning, California. Younger brother Dean Roberts and his wife Kim, two nephews Austin and Trevor Roberts of Laguna Hills, California. A host of aunts, uncles, cousins, friends, neighbors and co-workers and his best friend Todd of Chino, California.