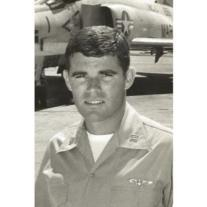 Colonel Dennis “Denny” R. Fitz, U.S.M.C. Retired, 69, of San Juan Capistrano, California passed away in his home surrounded by family and friends on June 8, 2012 after a year-long battle with pancreatic cancer. Dennis was born in Compton, California to Richard and Elizabeth Fitz and attended Lynwood High School and graduated from Dominguez High School in 1960. Dennis overcame major trials during high school, including the death of his mother followed by a sports injury that left him hospitalized for months. After receiving his bachelor’s degree in business management at San Jose State in 1964, he immediately joined the U.S. Marine Corps and went on to Naval Aviator School in Pensacola, Florida in 1966. He also completed aviation safety training at the Naval Postgraduate School in 1971 and later earned a master’s degree in computer data management from Webster University in 1985.

Although he hardly mentioned his accomplishments, Dennis had a distinguished 27 year career in the Marine Corps as a jet fighter pilot with over 4800 hours, serving two tours in the Vietnam War and flying over 400 missions. As a naval aviator of the F-4, A-4 and A-6 aircraft, he was one of nine Marines ever to earn 3 sets of wings. During his training with the Air Force in 1969 (out of 50 pilots), Dennis received the top award a graduating pilot can receive – The Commander’s Trophy of the Air Force Training Command.

From 1965 to 1976, Dennis served as a Naval Aviator, Operations & Safety Officer and Flight Instructor. He was selected as one of two Marines to serve as the Staff Planner Joint/Combined Exercise Directorate for AFNORTH NATO. He, along with his family, moved to Oslo, Norway from 1977 to 1979 where he conducted military cross-country ski exercises to the arctic Soviet border, attended Electronic Warfare School in Florence, Italy, and toured with his family across Norway and Europe.

From 1980 to 1981, he was the Commanding Officer of the Marine Tactical Reconnaissance Squadron 3 at Marine Corps Air Station, El Toro, California, supervising 72 aircrew, 680 enlisted Marines and the flight training program for 21 RF-4 aircraft and a detachment aboard the U.S.S. Midway.

In 1982, he supervised the flight training programs for three fighter squadrons in Iwakuni, Japan, developing training programs which resulted in squadrons reaching the highest mission readiness since the Vietnam Era. Dennis went on to serve as the token Marine under NORAD Space Command in Colorado Springs from 1983 to 1985 and was Branch Head of Tactical Space Planning at USMC Headquarters from 1986 to 1989.

In 1989, he was Assistant Chief of Staff of Training at El Toro Marine Corps Air Station where he oversaw flight simulators, the Staff NCO Academy and piloted the T-39 for transporting senior officers as well as several stranded enlisted Marines during a New England blizzard in order to get them home in time for Christmas.

Upon retiring from the Marine Corps in 1991, Dennis went on to work as a financial consultant for A.G. Edwards in Laguna Beach where he was well known by the locals as “The Colonel.”

Most importantly Dennis was a loving husband, father, brother, son, and a dear friend to many. He showed his family the world and taught us to pursue our dreams fearlessly, humbly and honorably. In addition to his aviator skills, he loved dancing with his wife, made delicious breakfasts, supported his son’s heavy metal guitar playing, and took his daughters to broadway musicals. Dennis enjoyed family parties at the house, walks on the beach with his three golden retrievers and tending to his perfectly groomed backyard.

A breakfast reception and Memorial Service will be held on board the U.S.S. Midway in San Diego located at 910 North Harbor Drive, San Diego, CA 92132 on Thursday, July 12, 2012 at 9:00 A.M. Interment will follow at Fort Rosecrans National Cemetery with full military honors at 1:00 P.M. More details to follow.

In lieu of flowers, the family requests memorial contributions be made in honor of Dennis to the Marine Corps Scholarship Foundation:

May God bless Dennis with a ‘safe landing’ in heaven.