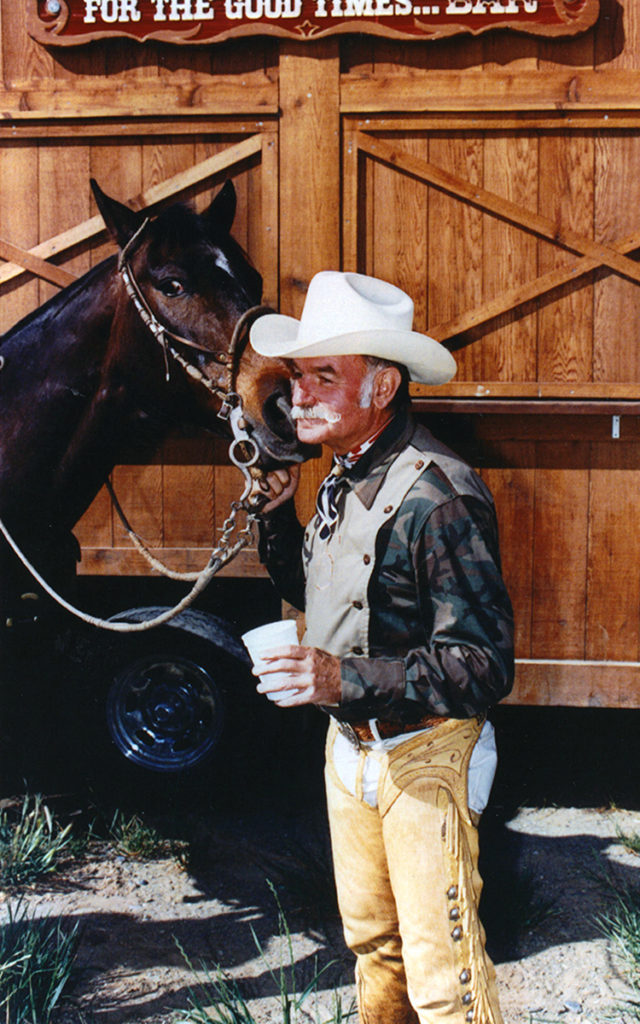 When I turned 21, I cozied up to the bar at the Swallows Inn and let a cowboy order my first drink. The cowboy didn’t even need to order. He nodded, and the bartender tilted his hat and got out two glasses. He filled them with PatrÃ³n and added a splash of water so slight, it had to be a joke. The cowboy nodded to me before downing his glass in a single sip, finishing with a satisfied and exaggerated, “Ahhhhhh.” The twinkle in his eye burned brighter. It was my turn. I took one sip. I thought I would die. While I was suppressing a righteous gagging fit, I scanned the room. The walls were filled with photos, old-timey portraits of cowboys and rodeos. Featured prominently was my cowboy, my grandpa. Until then, he’d always been my devoted gramps in the front row of every school play and graduation, his cowboy hat politely balanced on his knee. He was the gramps spinning yarns in tailored candy cane pants at Christmas. This was my first glimpse of him as a legend.

This is a cowboy’s last song, written by a granddaughter.

It was my first glimpse of the legend, but it wasn’t Orange County’s. Even before my grandpa donned a cowboy hat and his own custom designed boots, he turned heads. He excelled in sports and student government at Newport Harbor High, where he was in the class of 1948. After graduating, he started as a box boy and did deliveries for Richard’s Market, but his unique flair and artistry found flight as he began to do the store window displays, nabbing national awards for creativity and effectiveness. This led to his own design company, Industrial Exhibit, and the attention of a client, the Mission Viejo Company, who hired the marketing maverick in 1967. It was his work half a century ago that advertised the fledgling city of Mission Viejo, “America’s Most Successful New Town.” His work shone on billboards and bumper stickers all over Southern California. You can still see his artistry at the La Paz Homes Information Center and in the Portola Room at the El Adobe in San Juan Capistrano.

While he left his brand all over Orange County, it is his name that brings the most respect and recognition. While at the Mission Viejo Company, he got to live his lifelong dream of becoming a cowboy. He and his beloved horse Streaky dominated races, team ropings, and other rodeo events at Rancho Mission Viejo and other rodeos. He was a fixture at the National Finals Rodeo for decades. He was a member of El Viaje De Portola for 52 years and Rancheros Visitadores for 45 years and proudly rode their trails with his son for over 4 decades. He served on the board of the PRCA (Professional Rodeo Cowboys Association) for 10 years. In addition, he was a founding member of the Orange Country Sports Celebrity Foundation, and he served on the board of the Sheriff’s Advisory Council of Orange County and was a past president. He embroidered his name and signature brand on many of his cowboy shirts, belt buckles, and boots that were often the envy of all in his circles. His style, however, was one no one could steal because all of the most enviable pieces were ones he designed himself, along with his saddles. He was easy to spot in a crowd – all you had to do was look for the fanciest hat atop the head of the only man in history who could boast a handlebar mustache with enough finesse and pomp to make him look like a movie star.

While his name and signature style will bring recognition for years to come, I will always remember the twinkle in his eye. He was known to be a deft storyteller and a cowboy crooner so gifted he even cut his own CD, but as much as words were a talent and gift, so was his ability to listen. A “PatrÃ³n, water, tall” in hand at every event, it was really people he drank in, and you could always tell his delight in his eyes that sparkled with equal parts mischief and wisdom. Many boast he could draw anything and build anything from scratch, but it wasn’t just talent and handiness – he saw the world differently than most. He saw how ideas and people came together. He saw beauty, grit, and truth. He rode for the brand, he sang from the heart, and he embodied the cowboy way for his entire life, always proving a family man, a loyal friend, and a steward of nature and his community. His eyes twinkled because he got it. He understood that life is nothing without the love of your family, your friends, and your horse. He understood that life is too short to not love so hard you become the stuff of legends and songs. He understood that every trail deserves a little flair, and that whatever path you burn, you might as well make it pretty.

This cowboy leaves behind a whole lot of pretty. His style and artistry still shines in fixtures across Orange County. His voice still carries across the trails and at the “Good Times Bar.” He will forever be the last man at the fire, the memory cowboys toast for years to come. His parents called him Dennis B. Bean. Countless friends called him Buck, The Bucker, El Frijol, and the Ol’ Buckeroo. Two children call him Dad, five grandchildren call him Grandpa Bean, and eight children call him Great-Grandpa. He leaves us behind as his greatest works of art. We learned the cowboy way from the best. Love and laugh hard. Be loyal and honest and true. Listen. And everywhere you go, make it your duty to leave behind something worth looking at.

This is a cowboy’s last song, the end of a 90-year waltz. Happy trails, Gramps. Rest in peace.