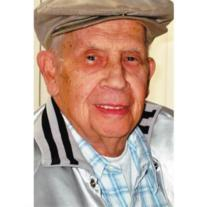 He was born to the late Newell and Maizie Merrill on February 13th, 1926 in Elwood, IN. Denny graduated from Frankton High School 1944. Dennis worked on the family farm until entering the US Navy in 1950. He married the late Betty Jean Merrill in 1951 and they lived most of their life in Arizona before relocating to Orange County, CA for two years to be closer to their daughter.

Dennis was on the Frankton Eagles basketball team, member of the 4-H Service on the Home Front and served our country proudly for 4 years in the United States Navy, leaving with a Good Conduct medal and a National Defense service ribbon.

He enjoyed bowling and golf, was married to the love of his life for 60 years, and was a devoted and loving father.

Dennis is survived by two children: Richard Merrill of Apache Junction, AZ and Barbara McCowan of Laguna Niguel, CA. He is also survived by 8 grandchildren and 1 great-grandchild.

3 responses to Dennis A. Merrill