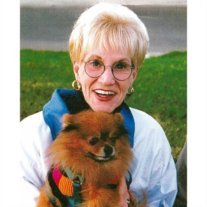 Dee passed away on January 27, 2013. A chapel service and viewing will be held from 10:00 a.m. to 11:30 a.m. on Thursday, January 31st at O’Connor Mortuary, which is located at 25301 Alicia Parkway, in Laguna Hills, California 92653. This will be followed by a graveside funeral procession, via the “The Toll Roads” (73), to Pacific View Memorial Park, which is located at 3500 Pacific View Drive, Corona del Mar, California 92625, for a brief graveside service at 12:00 noon. Friends and family are then welcome to attend a dessert and beverages gathering at Dee’s house in Dana Point at 3:00 p.m. to personally share their memories of Dee and celebrate her life.

Delores Elaine [Madsen] Eifler was born in Audubon, Iowa from parents of Danish descent. She grew up on a farm and helped with the care of cattle, swine, chickens, and harvesting of corn and grains. Each summer, she worked for neighbors doing housework and de-tasseling corn to earn money so that she could leave the farm life behind and pursue a career in nursing. Dee attended St. Anthony School of Nursing in Carroll, Iowa for 3 years and received her diploma and license in 1954. Six months later, she moved to Glendale, California and started working for Glendale Memorial Hospital, where she remained for nine (9) years. Dee married Joseph Eifler and had four (4) children [Jon, Joan, Jacqueline, & James] while working part-time in the OB and Med.-Surg. units. Dee then moved to Orange County in 1966, and started working at Hoag Memorial Hospital Presbyterian in Newport Beach. Dee was divorced in 1967, but continued working at Hoag for the next seventeen (17) years in the OB, Med.-Surg., and ICU-CCU units. She then held supervisory positions in the nursing office, and set up and supervised their 4th floor Neurology unit and their heart surgery program in CCU. Dee also did per-diem work for several local hospitals and home care service agencies. After leaving her job at Hoag, Dee taught a Coastline (C.R.O.P.) CNA program for 1.5 semesters, but then moved to her current home in the Monarch Beach section of Dana Point. Dee then went to work at South Coast Medical Center in Laguna Beach where she stayed for sixteen (16) years, working mostly Med.-Surg. charge positions. In 2004, Dee retired from her nursing career, although she occasionally worked at several flu clinics. She thereafter kept busy continuously decorating and remodeling her home, socializing with her many neighborhood friends, visiting with her children and grandchildren, and enjoying the company of her many beloved pets. In December 2010, Dee was diagnosed with cancer, which she spent the next two (2) years courageously trying to beat, without success. She quietly passed away in her sleep at Saddleback Memorial Medical Center in Laguna Hills, California on January 27, 2013.