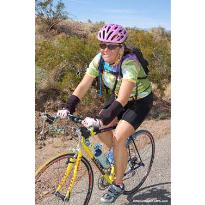 Deidre Rhinehart, wife and mother, died at her home in Capistrano Beach, Ca on Monday, September 10, 2007 concluding a 9½ year battle with breast cancer. Deidre was born at Glendale Adventist Hospital on April 17, 1963. She attended Hart High in Newhall, Ca. She began working in the banking industry in 1979 and followed with a stint at The Palace Theatre in Hollywood, Ca working in the box office. Soon after, she changed careers and began working in the broadcast television industry for Broadcast Rentals of Burbank, Ca where she met her husband Kirk. First diagnosed in 1998, Deidre began her war that included several battles. She received a new diagnosis in 2001 followed by a recurrence in 2002, and another in September of 2006. These interwoven with myriad surgeries. Deidre refused to allow her cancer to define her. In 2000, after returning from a family vacation, she decided it was time to get active and become physically fit. Her determination led her to begin endurance bicycle riding, with dozens of successful century rides 100 miles in one day. In 2005, Deidre competed in her first triathlon a race consisting of swimming, cycling, and running. In 2006 she won first place in the Los Angeles Triathlon Championship Series in her age group. Her mother and father, Sandra and David Worden, her husband, Kirk, their son Jonathon, and daughter Ashleigh survive Deidre. She leaves behind her sisters Glynis and Michele and brothers Scott and Paul. Her dear friends Tracey Mathews and Gitti Bredenberg are among the many friends she leaves behind. A memorial service will be held at Heritage Park in Dana Point, Ca at 11:00 AM Sunday, September 16. Deidre had a unique passion for living every moment as only a survivor can fully understand. Inspired by Lance Armstrong and his advocacy for survivors and cancer research funding she asked that in lieu of flowers contributions be made in her honor to the Lance Armstrong Foundation www.livestrong.com.