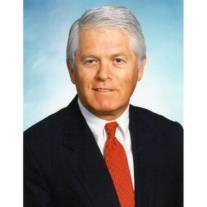 Dennis Duane Rickard passed away on April 4, 2015 in Long Beach, California at the age of 80.

He was a man of strong character, a cherished father, great friend and fantastic example to his seven children, nineteen grandchildren and four great grandchildren.

Duane Rickard was born the youngest son of Dennis & Polly Rickard in Scottsbluff, Nebraska and was very close to his older brother, Bob. He attended Alliance High School and as an all-star athlete, playing both football and baseball. He met his high school sweetheart, Charlene, were married in 1951 and had four healthy children – Debra, Suzan, Scott and much later, Kelly.

Duane’s determination and work ethic lead him to a very successful career in banking. According to many of his colleagues, “he was one of the toughest bosses and yet the best boss they had.” They appreciated his strength and leadership. He was a man of results.

He received many accolades and opportunities and with each new promotion came a new city. The Rickards were transferred to first Omaha, Nebraska, then Billings. Montana, and Minneapolis, Minnesota, and finally west to California. In California, he and his family lived in Fresno, Visalia, Sacramento, and Tustin. In 1984, Polly, Dennis and Charlene passed away. Duane relocated to Irvine.

Later he met and fell in love with Norma Jean whom he married adding three children to the family – Kellie, Kimberly and Jodie. Together Duane & Norma started a new phase in their life together, and had a fantastic time, working hard and playing harder. Golf, Palm Springs, cruises, season ticket holders to the Los Angeles Angels and Gin Rummy. Duane was noted to tell family that Norma owed him a lot of money from the numerous games they had played together, but most important to each – their family and the great grandchildren. Many family get togethers included Gin tournaments which the grandchildren enjoyed as much as Duane.

As challenges always arise, Duane fought with a heart condition and Norma with Multiple Sclerosis. Norma passed away in 2007 and left Duane and the family devastated.

He enjoyed his “second career” as a golf marshal at Coto de Caza and Pelican Hills Golf Course in Orange County. “Great way to start the day – on the golf course” he would always say. He always loved the smell of fresh cut grass and the sun rising over the greens.

Mary Ann, came into his life in 2011 as his companion, spiritual guide and friend. He cherished their time together and was immediately attracted to her amazing sense of humor and her strong family values. Together they played many card games and watched a lot of baseball.

It is a very difficult time for all of us who have been so blessed to have had Duane in our lives, and to accept that he will be no more. We will miss being beat at the card table and sent back to the minor leagues.

In lieu of flowers, donations may be made to the National Multiple Sclerosis Society
P.O. Box 4527, New York, NY 10163

A memorial service will be held on Saturday, July 25th at 1:00 pm at O’Connor Mortuary, 25301 Alicia Parkway, Laguna Hills, CA.